On this 1st anniversary of Mother Angelica’s death, 20 of her memorable one-liners 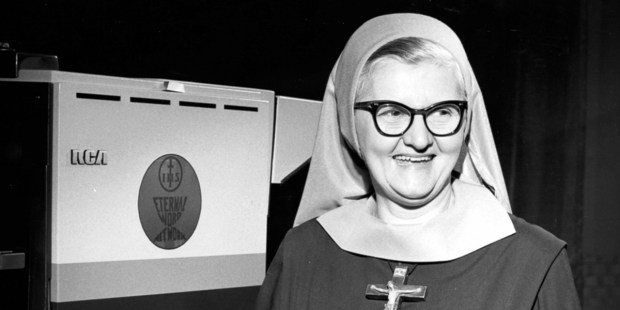 Mincing words was never to her taste.

Mother Angelica, a Poor Clare of Perpetual Adoration, never did anything in a small way. She was known for her ability to parry a quick retort, make a wry observation or toss off a witticism that could catch a listener off-guard in its wisdom. Due to a stroke, the EWTN foundress had been silent for more than a decade, but her dart-like observations still hit their mark. We’ve collected a few for you, here. Most of these were found in Mother Angelica’s Little Book of Life Lessons and Everyday Spirituality.

On Conversion:
Even the devil believes that God exists. Believing has to change the way we live.

On Faith:
Faith is one foot on the ground, one foot in the air and a queasy feeling in the stomach.

On Clarity:
If you are following God, he never shows you the end. It’s always a walk of faith.

On Trust:
Unless you are willing to do the ridiculous, God will not do the miraculous.

On Mindfulness:
Everyone drags his own carcass to market, so be careful.

On Love:
Love is not a feeling; it’s a decision.

On Mercy:
You can’t go to heaven hating somebody. Forgive now.

On Anger:
St. Jerome used to hit himself with a rock every time he lost his temper. I’d be dead as a doornail with no ribs if I did that.

On Struggle:
If you’ve got a cross, carry it. It’s to make you holy.

On Error:
Every moment of life is like God saying, “Look, I know you messed up the last moment, but here’s a new one.”

On Pride:
Once you contemplate the humility of Jesus in the Eucharist, how can you possibly justify your pride?

On the Courage to Suffer:
It takes a lot of guts to be in pain all day long.

On Enemies:
Don’t say, “If it weren’t for that person I could be holy.” No; you can be holy because of that person.

On Not Limiting God:
Your plans, your projects, your dreams have to always be bigger than you, so God has room to operate.

On Perseverance:
Faith is what gets you started. Hope is what keeps you going. Love is what brings you to the end.

On Holiness:
Holiness is a beautiful struggle.

On Death:
I guess that is what dying must be like: to be finished and to be able to look back at the struggles of life and know that God was your constant companion.

On Serving:
God looks for dodos. A dodo doesn’t know it can’t be done. God uses dodos, and I’m a dodo.

On Worldliness:
God wants you to be in the world but so different from the world that you will change it. Get cracking.