As a priest, you realize there is no such thing as coincidence 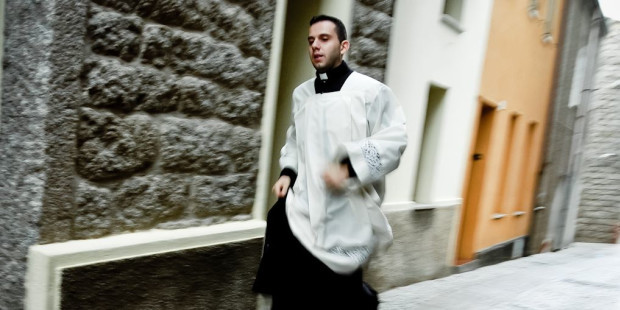 God had sent me to this Mass to speak to this daughter of his who had such a great need for him.

I had woken up content and looking forward to celebrating Mass in the parish. I sprang from bed, eager to get ready and to arrive early for my appointment with Our Lord and his people.

At the end, some women approached me, “Father, could you hear our confessions?”

I said yes — there were only three of them — but after I’d finished hearing the confessions of the first three women, I saw more people had gotten in line, and then more and more … until three hours had passed. I was hungry, thirsty and ready for a break.

I started to head back to the seminary, content with the morning’s ministry, when another woman approached me. “You’re a priest, right? My father died yesterday and they are going to bury him today, but I haven’t been able to find a priest.”

The prayer that came to my mind was, “Lord, I see that you want me to work in your name today! I just ask that you give some peace to my stomach!”

I celebrated a Mass of Christian burial for the woman’s dad, and decided to take a taxi back to my house and finally get some breakfast, and perhaps even lie down for a bit. Though you might not realize it, celebrating two Masses and hearing three hours of confessions on an empty stomach isn’t that easy.

So with an almost childlike excitement, I readied to dig into my sandwich … and as if the world was suddenly in slow motion, a brother arrived to tell me: “They are looking for you. Father. The parish priest got sick and there’s no-one to celebrate the 1 p.m. Mass …”

My human frailty immediately began to protest and my thoughts turned in complaint to God. “But, Lord, you know that I haven’t even had breakfast! I’ll go, but afterward, give me a break … or better yet, send another priest!”

God never ceases to amaze me, because just as I finished complaining to him, I clearly felt his response: “On the day of your ordination, you told me that you offered yourself completely to me and to my people.

“Besides, go to this Mass. I have a surprise for you.”

I gobbled down my sandwich and went to celebrate another Mass, feeling, quite frankly, angry.

I went out of a sense of obligation and not because I felt any desire to go.

But as I entered the sacristy to vest, my anger started to calm down. A couple approached me and said, “Father, our daughter tried to kill herself a month ago and we have convinced her to come with us to Mass today. Please include her in your intentions.”

This must have been the surprise: God had sent me to this Mass to speak to this daughter of his who had such a great need for him. As a priest, you realize that there is no such thing as a coincidence. God himself directs our paths.

It was a marvelous moment of Providence because the Gospel of the day was just what the girl needed: “Come to me, all you who labor and are burdened, and I will give you rest.”

As I celebrated the Mass, I was convinced that it was God who had placed me there — before beginning, I had prayed before the tabernacle, asking him to speak through me. I “reminded” him that I hadn’t had breakfast, and that I was a little angry …

And the Mass was overflowing with grace. I don’t know how to explain it, but it was Jesus himself who guided it. He was the one speaking while I gave the homily. They were his words — even today I can’t describe what happened — his words were words of comfort, of caresses, of fortitude, of encouragement.

After Mass had ended, the couple approached me again, this time with their daughter. She was crying and embraced me. “Father, I so desperately needed to hear everything you said. I need God’s help so much. I have distanced myself from him. Now I just want to place myself before him, and ask him to love me and to help me go forward …”

When this young woman embraced me, I felt God’s whisper: “I needed you in this Eucharist. This is why I had you come …”

I love Our Lord — how he finds his ways to get where people need him. This young woman who tried to kill herself is now a regular at the 1 p.m. Mass. God has changed her life.

And since that day, any time that I feel tired or angry because of the excess of work, I think, “Get going. Go to Mass and live it as if it were your first and last Mass. God needs you.”

And it seems that God answers me, “Be at peace. Go. I celebrate Mass in your place. Only lend me your hands and your mouth …”

Say a prayer today for the priest of your parish. Undoubtedly, he’s also gone to celebrate a Mass or two without having had breakfast, and even feeling a little angry …

[Translated and adapted from Aleteia’s Spanish edition. This piece reflects how both the demands made of priests and also the regulation of their ministry vary from country to country, depending on factors such as the number of faithful relative to the number of priests.]