Does your husband need help being a father? 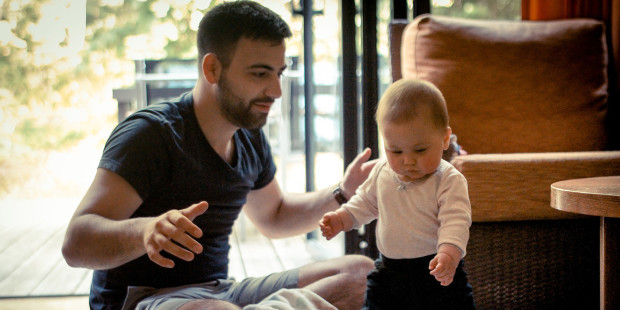 What to do if your husband is in the passenger seat (or absent) on the parenthood journey.

Recently I heard a story of a woman who went with her family to the supermarket. She came back home with the kids and the groceries, but without her husband. She simply forgot about him and left him in the store, only realizing her mistake when he called and asked furiously, “Where are you?”

But maybe the better question in some marriages is. “Where are you, Dad? Where did my husband and teammate go?”

It’s not all that unusual for one spouse to stop driving the minivan of parenthood, and instead move into the passenger seat (or maybe the back seat, or in a second car). For whatever reason, it feel like their emotional GPS is broken, unable to follow the needs of loved ones.

It’s hard for me to write about absentee parents, and fathers specifically, because my own father knew how to love his daughters and was never ashamed to show it. But now that I have some perspective on it, I think that the deep relationship between us only came to be because my mother made a place for it. My kindergarten was near her place of work, but it was my father who took me to school every day. We never took the tram, we always left early and walked the distance (roughly the three tram stops). It gave us time to talk.

Now, when I want to work on a problem, I still walk the same route in my hometown. My father is no longer alive, but in a sense, on those small streets, we walk together.

Read more: My favorite father: When Dad left, a priest raised me

He cooked our dinners. It was in the seventies when most men didn’t even know where to find salt in the kitchen. My mom absolutely hated the mess he left behind, but instinctively she knew that the strange soups and pasta he cooked were more important. And then, there were our trips. Since he worked with athletes, we often joined him at training camps. We had a chance to get to know our dad in a broader context—as an employee, a colleague, and simply as an ordinary man in his good and bad moments. It helped to create a genuine and stable relationship between us.

And, looking back, it taught me that a father does not have to be a superhero or a five-star chef. He just needs to be a father. Because fatherly love is a little different from a mother’s love, but it is equally beautiful.

In my experience, mothers open up a protective umbrella over their children, while fathers encourage taking of necessary risks. They encourage courage and breaking out of comfort zones. They support independence and self-reliance, without the redundant safeguards that mothers provide. A father’s tender but assertive discipline teaches kids to take responsibility for who they are, what they do and for what kind of a person they are to those who love them.

A daughter of a wisely loving father is more confident as an adult woman; a son better understands what it means to be a man and to create strong bonds, with a woman, and with his children.

But it still happens: The father who is present in the family only physically. Maybe he’s distant, only forced to act like a parent only in extreme situations. Maybe he needs firm prompts like: “Go talk to your son.” Maybe he only asks about school days and shows interest in little else. Or he’s a weekend dad, trying to make up for his physical (or mental) absence during the workweek.

Read more: This single mom dressed like a dad for her son

We tend to absolve fathers easily, which might be part of the problem. Especially if he’s the financial breadwinner. But a parent’s job isn’t just to set the child up in the world, but to make sure he feels good in it, regardless of whether he has three cars or only a scooter or needs to walk to school.

Another part of the problem is that sometimes men are not well prepared themselves. Sometimes they’ve been raised by distant fathers and can’t break the cycle. Or they have the wrong disposition.

In psychology, we talk about a pattern of rigid behavior seen in men: There are many men who want to be good fathers. They are cool, open-minded, they know how to listen and how to express their opinion, but at the same time, they are emotionally blocked. They are not able to identify and convey their feelings. They are a little embarrassed, a little afraid, they don’t enjoy the emotional closeness, so they don’t engage. In spite of themselves, they create mostly superficial relationships. Sometimes they only become comfortable with emotion and affection in their role as grandfathers.

So can you help a man to be a better dad?

Long story short: Yes. You can help by creating a situation which will help him establish a relationship with his child.

Remember the father from Kramer vs Kramer? A workaholic, he awakens to fatherhood when he needs to make breakfast for his son and discovers that he doesn’t have to do it the way his wife did! He clumsily teaches his son to prepare a French toast, and somewhere in the smoke, over the burnt pan, appears the first flicker of feelings between father and son.

So think about when it’s good to remove yourself from the room, in order to make a little more room for fatherly love. And I mean that. Go on strike. Tell your husband how you feel about the status quo. Tell him you don’t want to always be the driver or the chef. Take a break from the family life for a week.

You can visit a friend and be in telephone contact with your child. Monitor the situation if you’re concerned, but don’t interfere. Maybe it will be a bumpy ride, but there will be an adventure and conversation, and fatherly feelings will certainly come through.

There are many ways to spend some quality father-son time. and it doesn’t even require a special fishing trip. Just participating in daily life can help create that missing bond. The point is not to be a father for the holidays (the weekends, the camping, the good times), but a father from the heart for all times.