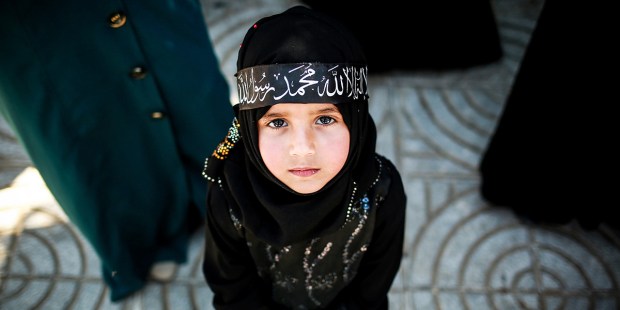 The faith of Muhammad may overtake Christianity by the year 2100.

Christianity is the largest religion in the world today, but if trends persist, Islam will overtake it by the end of the 21st century.

So predicts the Pew Research Center, which identified two factors in Islam’s current status as the world’s fastest growing faith: Muslim women are having more children, on average, than women of other religions, and adherents to Islam, on average, are younger than devotees of other religious groups.

“Around the world, each Muslim woman has an average of 3.1 children, compared with 2.3 for all other groups combined,” said the report, “Muslims and Islam: Key findings in the U.S. and around the world.”

Muslims are also the youngest (median age of 23 years old in 2010) of all major religious groups, seven years younger than the median age of non-Muslims. As a result, a larger share of Muslims already are, or will soon be, at the point in their lives when they begin having children. This, combined with high fertility rates, will fuel Muslim population growth.

The study estimates that by mid-century, Muslims will have increased across the world by 73 percent over numbers in 2010. Christians are projected to grow only by 35 percent during the same time period.

The news might  resonate particularly with Europeans. Muslims in Europe are projected to expand to 10 percent of the population by 2100. On the one hand, it might give fuel to those whose fear of a “Muslim invasion” or “Muslim takeover” of the continent was no doubt made worse by recent comments made by Turkish President Recep Tayyip Erdogan.

“Have not just three but five children,” Erdogan told his “brothers and sisters in Europe” while addressing a rally in central Turkey. “The place in which you are living and working is now your homeland and new motherland. Stake a claim to it. Open more businesses, enroll your children in better schools, make your family live in better neighborhoods, drive the best cars, live in the most beautiful houses.”

In addition, the recent terrorist attack outside the houses of the British Parliament, which was carried out by a Muslim with ties to Birmingham, refocused attention on that central English city, where 20 percent of the population is Muslim.

The Pew study also noted that while migration doesn’t affect the overall growth of Islam worldwide, it does increase the religion’s profile in certain areas. Europeans can certainly attest to that, as most of the recent migrants and refugees from the Middle East and North Africa are Muslim.

In the United States, Pew projects that Muslims will double by 2050, from about 1 percent of the general population currently to 2.1 percent. One of the most public manifestations of this growth, of course, is the construction of buildings for worship and the study of Islam. Though the furor over the building of the so-called “Ground Zero Mosque” in Manhattan has largely been forgotten, not everyone is open to seeing new Islamic Centers spring up throughout the country. Last year, as Muslims were having trouble getting a building permit for a mosque from Bernards Township, New Jersey, several Christian organizations offered them legal support, on the grounds that religious freedom is for all, not only Christians. Some members of the Southern Baptist Convention balked, however.

“If we defend the rights of people to construct places of false worship, are we not helping them speed down the highway to hell?” said Tennessee megachurch pastor Dean Haun, explaining why he resigned from the International Mission Board of the Southern Baptist Convention over its support for the mosque. “I want no part in supporting a false religion, even if it is in the name of religious freedom.”

Haun’s 2,800-member church also voted to withhold funds that were earmarked for the SBC’s Cooperative Program, which finances state and national missions, SBC seminaries and other projects, reported Christianity Today.

The question of how a growing Muslim population can integrate into American society is worth reflecting on so that the United States might avoid the kinds of problems experienced by, say, French society, where alienation of Muslim populations has led to civil unrest at times, says Anouar Majid, author of Islam and America: Building a Future without Prejudice.

“It’s an issue worth reflecting on because Islam in the abstract and Western values in the abstract are bound to clash. In Islam, the notion of secularism and democracy are disturbing. In addition, pious Muslims stay away from many Western dietary norms and aspects of social life. Many of these are kind of frowned upon, in fact damned, at least theoretically, by Islamic doctrines and Islamic thinking,” said Majid, director of the Center for Global Humanities at the University of New England and the founding director of the Tangier Global Forum in Morocco. “So when these Muslims come into these societies, they experience a kind of dislocation, a trauma, because now they’re forced to negotiate, they have to acclimate to a system that, according to their preachers, negates their belief system, or clashes with their ethics. All kinds of violence erupts at times, and that is a problem. The challenge is how do you take a population that has been educated to believe in a certain way of life, a certain way of being, and integrate it into a world, a society that sees culture and politics through very different lenses.”

While the upward trend in Islam is largely due to the higher birthrate, there is also a significant amount of conversion to the religion. Gabriel Said Reynolds, professor of Islamic studies and theology at the University of Notre Dame, pointed out in an April 2016 article that Islam is appealing to an increasing number of Americans.

“This is the issue which should concern the American Church,” Reynolds wrote in Church Life Journal. “Pew research estimates (in a 2007 survey) that 23 percent of Muslim Americans identify themselves as converts from another religion. In other words, about 759,000 Americans are converts to Islam. Most of these conversions are among African-Americans but an increasing number of whites and Latinos are also converting to Islam (about 67 percent of Muslim converts are former Protestants and 10 percent former Catholics).”

While some Christians convert to Islam for the sake of marriage (according to Islamic law a Christian man may not marry a Muslim woman), many Christians convert to Islam after Muslims invite them to do so. Muslims have a remarkable zeal for proselytism or “da’wah” (the Arabic term commonly used by Muslims now in English). Most American mosques welcome visitors regularly and pass out literature, or tracts, to them written specifically for Christian audiences (literature which often emphasizes that Islam has a high regard for Jesus as a prophet). The internet is buzzing with Islamic da’wah sites inviting visitors to “convert to Islam” and featuring options to chat or call a Muslim with any questions. Da’wah is also increasingly taking place on the street or on billboards in American cities with slogans such as “Muhammad Believed in Peace, Social Justice, Women’s Rights,” or “Abraham, Moses, Jesus, Muhammad: One Family, One Message.”  The large annual conferences of Muslim American organizations—the Islamic Circle of North America (ICNA) and the Islamic Society of North America (ISNA) —include sessions of da’wah training. Videos of famous Muslim da’wah activists such as the South African Ahmed Deedat (now deceased) or the Indian Zakir Naik—including their debates with Christians—have millions of hits on YouTube. On many American campuses “Muslim Student Associations” host “Islam Awareness Weeks” which seem to combine da’wah with the fight against Islamophobia.

In this light, Russell Shaw, author of American Church: The Remarkable Rise, Meteoric Fall, and Uncertain Future of Catholicism in America, said the new Pew study is a “real rebuke to Christianity.”

“Jesus tells us to preach the gospel to the whole world. After 2000 years, Christians haven’t responded nearly as well as they (we) should—and in the last half-century, i.e., since Vatican II, the steam seems to have gone out of the Catholic missionary enterprise,” Shaw said. “We are still up to our eyeballs in self-congratulating happy talk. The new books by Archbishop Chaput, [Rod] Dreher, and [Anthony] Esolen—saying things I’ve been saying for quite some time—should be a wakeup call. I hope and pray they have that effect.”

Do you have something to add?  We want to hear from you, join the discussion here!