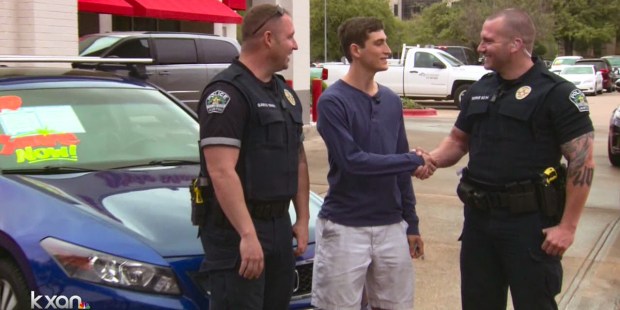 When they found him stranded at the side of the road, they decided to help the 18-year-old out.

When two police officers in Austin, Texas, heard a report of a car pulled over on the side of the road, they stopped to see what was wrong. Their routine traffic stop turned into an act of kindness that made a big difference in a young man’s life.

Patrolmen Jason Borne and Tommy Swain told KXAN in Austin that when they showed at the scene last month, they realized that 18-year-old Cody Morgan was stranded with a blown-out tire.

Together they taught him how to change it, and noticed that his spare, like the rest of his tires, was in bad shape.

“It was only a matter of time before it exploded too and he’s driving down a highway. It’s not safe for him or anyone else on the highway,” Borne told KXAN.

After arranging a tow for Morgan’s car, the two officers split the bill for brand new tires.

“You could just tell by the look in his face, look in his eyes, what we were doing for him, he really appreciated it,” Swain said.

Their act of kindness didn’t end there. Once they got back to the station the patrolmen started a GoFundMe account and appealed to the public to help Morgan fix up his car or by a new one:

This young man … is driving an old car with unrepaired collision damage and a front end that is terribly un-aligned which led to today’s problem. I know without the alignment being fixed, the problem will persist with his front tires being destroyed. I want to get his alignment done at a minimum. Ideally, it would be even more incredible to fix the car, or even send him on to college with a more reliable mode of transportation.

Thank you for taking the time to read this far. I hope we can give this young man an inspiring display of community and philanthropy.

In one month, 180 had donated $8,550 – enough to replace Morgan’s 16-year-old car with a reliable used one. When the patrolmen invited Morgan out to lunch last week, he had no idea than he would be driving home in a new car.

“As far as Cody knew, all we were going to do today was meet for lunch,” Officer Jason Borne said. “Then afterwards I said, ‘Let’s just go check out some cars and see what your trade-in value would be.’”

They took him to a dealership and walked by a row of cars that had been picked out for him. After choosing a 2012 blue Honda Accord, Morgan was stunned to find it would be paid for by the GoFundMe account.

He told KXAN, “Really all I can say is thank you. I mean, that’s all I can keep saying. I can’t do anything else except [to] pay it forward.” Thanks to the officers’ incredible kindness and generosity, he’ll go to college this fall with a lot more than just a new set of wheels.