Help! How do I break the habit of bringing snacks to Mass for my kids? 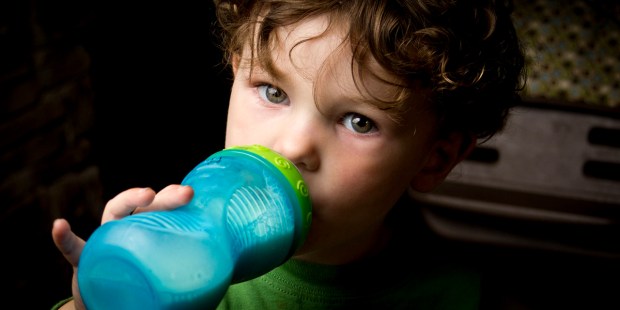 Mass is actually a good place to teach children that sometimes gratification must be delayed, which is an important lesson for life.

I need some moral support ending snacks during Mass for my toddler. I would like to phase out bringing snacks, but do you think my son (he’s 2-and-a-half) will understand that he can’t have snacks anymore, but his baby sister (she’s only 5 months right now) still can? Should I go cold turkey, slowly phase it out, or replace it with a book or some small toy? I’m just preparing for the obstinate behavior and worried how this may disrupt Mass because my son’s been pretty content and quiet at Mass now with a small snack and sippy cup.

It’s been ages since I’ve been asked about babies and toddlers because my son is a teenager now, but I remember having this same type of discussion a decade ago.

I used to be pretty militant about these things and against all types of snacks and toys at Mass. I still hold the pretty rare belief that a child is not going to die of dehydration, starvation, or boredom during that brief one hour in church.

However, I do recognize that sometimes Momma just wants to make it through Mass for once, and a snack or toy can make impossible situations a little more tolerable. So if I see a parent doing the best they can and they break out a bag of Goldfish I don’t begrudge them.

Personally, I never used snacks as a diversion. I planned for Mass liked I planned for anything else. I made sure my son had a freshly changed diaper and was fed before Mass when he was an infant. When he got to be toddler-aged he learned to eat before Mass, and snacks were for afterwards on the car ride home. Toys were strictly forbidden. I never thought it unreasonable to expect my son to sit quietly during Mass, taking his social cues from all those around them. Kids are pretty observant and smart.

We never did the cry room. If he got unruly, we got up and left. This action was followed with light tap to the bottom communicating that unruly disruptions were not welcome. We only had to leave Mass for disruptive behavior twice in his entire life. Like I said, kids are pretty darn smart. Of course, this was just how I parented. Everyone has their own way of doing things.

Another reason why I’m not particularly fond of snacks and toys at Mass is because I’ve seen the damage they can do to pews and flooring. I’ve volunteered my fair share of weekends buffing out crayon and marker smudges from the pews and scrubbing juice stains from carpets. I’ve seen scribbled and torn hymnals because parents use books like a toy for distractions.

If you want my honest opinion, I believe a toy or snack is wholly unnecessary and actually encourages bad behavior, like impatience and caving into instant gratification. It’s better to never start the practice. An infant of course will need to be fed, but I don’t think it unreasonable at all to expect a child over two  years old to understand that the baby needs feeding and that he can wait for a snack after Mass. Again, kids are smart.

That said, why not cut out the snacks entirely, cold turkey? Let your son know he’s growing up and doesn’t need a snack anymore, like a baby. You can shore up that argument by reminding him of other ways becoming a big boy means making changes. Make sure he has a meal before Mass and tell him if he behaves he can a small snack on the way home if he is truly hungry. If he throws a temper tantrum I trust that as a parent you’ll deal with it.  There will probably be some resistance from time to time but I’m confident you can address it as it arises. Other than that I would just carry on at Mass as you typically do. It will only be a big deal if you make one.

I know it’s hard to give up something if you have a good thing going. Right now your son is quiet and content in Mass and you’re going to risk upsetting all that. But think about how much harder it will be years from now if you are still using food as a mindless distraction and reward for behavior not to mention the message it sends to your son about our attentiveness to the mass. Also, church ladies like me will be forever grateful to not have to scrub up juice stains and scrape gum from under the pews.

Lastly, I just want to encourage you. Thank you for bringing your family to Mass and thank you for caring enough to write me. Please keep us posted on how it going.