Pope to lead his first Sunday Corpus Christi procession, after changing it from Thursday 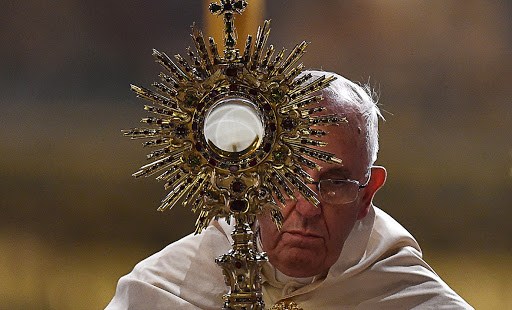 After announcing the change in March, now Francis joins other regions in marking the feast this weekend

Pope Francis will lead his first Sunday Corpus Christi procession this weekend, after having announced in March that the Vatican celebration wouldn’t be held on the traditional Thursday date of Corpus Christi, but moved to the weekend to facilitate the participation of the faithful.

Here below find Aleteia’s report on the change and its motives.

VATICAN CITY — In an unprecedented change, Pope Francis has decided to move the traditional Roman Corpus Christi procession from Thursday to Sunday, Italian media is reporting.

According to Italian media reports, the pope has taken this unprecedented decision for two main reasons.

First, Francis wants to follow the Italian liturgical calendar, which observes Corpus Christi on the Sunday following the Solemnity of the Most Holy Trinity.

Although numerous bishops’ conferences (including in Italy and the United States) have transferred Corpus Christi to Sunday to accommodate the faithful, the Vatican had kept the traditional liturgical observance of Corpus Christi, celebrating this solemn feast on the Thursday after Trinity Sunday.

Beginning this year, Pope Francis is scheduled to celebrate Corpus Christi on Sunday evening, June 18, 2017 instead of the preceding Thursday. The change has been indicated on the papal household’s calendar of liturgical celebrations.

According to reports, there is another reason for the shift.

Pope Francis thinks a greater number of faithful, pilgrims and tourists will participate in the Eucharistic procession through the heart of Rome if Corpus Christi is celebrated on a Sunday.

In recent years, the number of faithful attending the Mass before the procession has decreased considerably. The main obstacle, it is said, came from the feast coinciding with a work-day. By moving Corpus Christi from Thursday to Sunday, reports say, Francis hopes attendance among the faithful will increase.

In the first year of his pontificate, Pope Francis surprised everyone by following the Corpus Christi procession on foot, behind the Most Blessed Sacrament, instead of kneeling before the Eucharist on a modified “pope-mobile,” as his predecessors had done. Then, in 2014, no longer able to make the journey on foot, the pope chose to travel to the Basilica of St. Mary Major by car, ahead of the arrival of the Lord in the Blessed Sacrament.

According to FarodiRoma (Rome’s Lighthouse),“the pope wanted all the attention of the faithful to be on the Eucharist that was being carried in procession, and not on him.” Once the Blessed Sacrament has arrived at St. Mary Major, the pope would then preside at solemn Benediction.

This year, the possibility of eliminating the vehicle that holds aloft the Most Blessed Sacrament, in favor of two deacons carrying the monstrance on foot, is also being considered.

INTERESTING FACT:  In August 1264, Pope Urban IV issued the Bull Transiturus, ordering Corpus Christi to be celebrated annually on the Thursday after Trinity Sunday throughout the Latin Church.

The papal bull begins with the words: Transiturus de hoc mundo ad patrem salvator dominus noster Iesus Christus, i.e. “As he was about to pass from this world to the Father, our Lord and Savior Jesus Christ,” referring to the Last Supper (cf. John 13:1). It was the very first papally sanctioned universal feast in the history of the Latin Rite.

St. Thomas Aquinas contributed substantially to the bull, particularly in parts concerned with the liturgical text of the new feast. Aquinas composed the sequence Tantum ego sacramentum for this purpose.