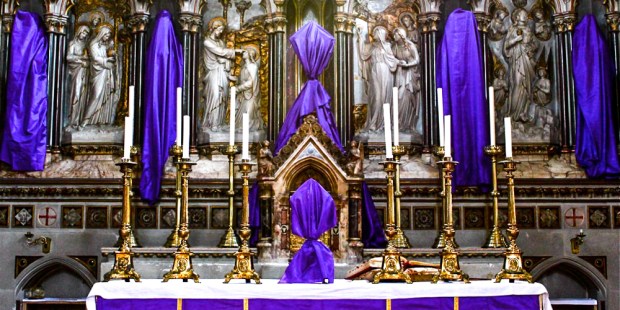 The joy of Easter is almost here, but before that we must accompany Jesus in his Passion.

Traditionally the final two weeks of Lent in the Roman Rite are used as an immediate preparation for the sorrowful events of the Easter drama. It is a period of time to focus more and more on the Passion and death of Jesus and so accompany him on his way to Calvary.

For several centuries the Fifth Sunday of Lent (this coming Sunday) was known as “Passion Sunday” and marked the beginning of a special sub-season called Passiontide, which extended up until Holy Saturday. During this time the Church’s liturgy became more somber and a sorrowful mood was reflected in the various practices that occurred in the liturgy.

The most obvious example of a more somber mood was the veiling of statues and images, which remains an optional practice in the current Roman Missal: “In the Dioceses of the United States, the practice of covering crosses and images throughout the church from [the fifth] Sunday [of Lent] may be observed. Crosses remain covered until the end of the Celebration of the Lord’s Passion on Good Friday, but images remain covered until the beginning of the Easter Vigil.”

Read more:
Why do Catholics cover crucifixes and statues during Holy Week?

It was also on the Friday of this initial “Passion Week” that the feast of the Seven Sorrows of the Blessed Virgin Mary was celebrated (it is now fixed annually on September 15). The current Roman Missal still provides an alternative prayer for that day (Friday in the Fifth Week of Lent), remembering Mary’s own bitter passion.

O God, who in this season
give your Church the grace
to imitate devoutly the Blessed Virgin Mary
in contemplating the Passion of Christ,
grant, we pray, through her intercession,
that we may cling more firmly each day
to your Only Begotten Son
and come at last to the fullness of his grace.

Palm Sunday was seen as the “Second Sunday in Passiontide,” and is currently listed in the liturgical calendar as “Palm Sunday of the Lord’s Passion.” It is on this day that the Passion narrative is read, the longest Sunday Gospel reading of the entire year. The Church beckons us on Palm Sunday to look toward the cross and see Christ’s immense love for us, sacrificing himself for our sins. It is a preview of what is to come on Good Friday.

After Palm Sunday, Passion Week gives way to Holy Week and the Church follows Jesus during his final days in Jerusalem. The Passion narrative was traditionally proclaimed during Mass on each day of Holy Week leading up to Holy Thursday.

Wednesday during this week is known as “Spy Wednesday” and signified the day on which Judas betrayed Jesus and informed the Sanhedrin of his plan.

Read more: I Spy a Traitor: The Traditions of “Spy Wednesday”

Various other practices occurred during these final two weeks of Lent, such as Stations of the Cross and the Tenebrae services. In the end, Passiontide is meant to be a special penitential period where we focus on Jesus’ bitter passion and foster within ourselves sorrow for our sins. The good news is that Passiontide does not have the last say, and this somber period of preparation ends quickly so that our hearts can rejoice in the beauty of Christ’s resurrection.