How to make your internet enemies disappear 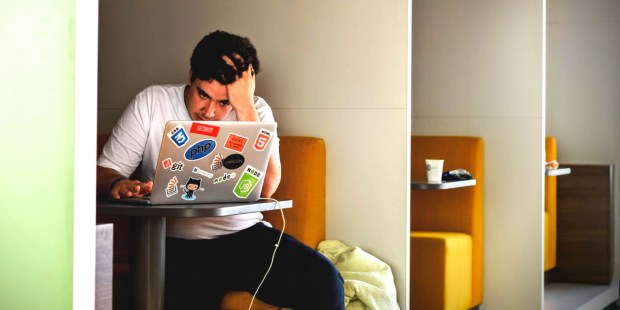 We have to keep in mind how maddeningly ineffective language can be as a way of conveying ideas.

I don’t know a single person who spends time rubbing his hands together and plotting my downfall. So while I do know that Christ flat out commands us to love our enemies, I figured I was off the hook, since I don’t seem to have any.

Except maybe the theatrical kind isn’t the only kind of enemy you can have. Actually, the predominant kind of enemies a lot of us have are the kind we encounter in comment boxes, Facebook threads, and tweets — people who are on the opposite side of the religious or political spectrum from us.

We might not say we hate them, but we’re quick to write them off as self-righteous, thick-headed trolls, who are incapable of listening to cool reason, and inflexibly hold to their own biased and slanted idea of reality.

Of course, that attitude isn’t exactly loving. I think it’s fair to say that more often than not, those people qualify as our enemies. And that’s when we ought to remember Christ’s command to love them, just as the Father does, who “causes His sun to rise on the evil and the good” alike (Mt 5:25).

The command to “love your enemies” is very to-the-point, because of course, the moment we start loving our enemies, they cease to be our enemies, and become brothers. Or, maybe distant cousins, but family, anyway.

Of course, they still might foster hatred toward us, but if we can manage to love them in spite of their words, we won’t think of them as enemies; we’ll think of them just as people who don’t love us back.

Read more:
Love Thy Enemy: That Is, You Don’t Have One*

Love your enemy, and he ceases to be your enemy. No matter how outrageous, how infuriating, their beliefs might be, love is still always possible. It must be, or Christ wouldn’t require it of us.

Here’s something that helps me lean towards love, if I can manage to keep it in mind.

We might all be speaking English, but that doesn’t at all mean we are speaking the same language. Everybody hears different connotations, according to their own personal life experiences. So while language is the best way we have of getting the ideas that are in our head into the mind of somebody other than ourselves, we have to admit that it’s just not a perfect system.

Think of the husband who says “let’s go out to eat tonight,” and the wife who interprets that to mean “I can’t take another night of your cooking.” That type of misunderstanding is normal enough among people who love each other, and it’s astronomically more frequent online, where communication is stripped down to bare words, unaugmented by facial expression, tone, body and context, and bolstered by the intoxicating sense of anonymity we feel, which protects us from the social consequences of our words.

When you realize how inexact language can be, and remember at the same time, that everybody’s words are only the tiniest tip of the iceberg of who they really are, it’s a bit easier to resist reducing people to comically black and white caricatures of the real, live, multidimensional children of God that is their true face.

Read more:
“Arrival” and the unique manner of God’s speech

Certainly, people can be inflexible and unreasonable and infuriating, and maybe you haven’t misunderstood them at all — maybe they are just flat out wrong, and irritating about it to boot.

But funnily enough, when somebody we love exhibits those same traits, somehow it’s much easier to overlook it, because you have context — you know who they are, and what burdens they bear, and you’ve seen them on their good days, too. You know they are capable of nobility as well as sinfulness. You’re not really tempted to suddenly reduce them to just their most obvious sins.

If you can keep in mind how maddeningly ineffective language can be as a way of conveying ideas (although it’s still the best method we have, this side of heaven) and remember at the same time that everybody carries with them years of their own personal experience, nobility and sinfulness, wounds, idiosyncrasies, and subtle biases, well, it’s that much easier to keep in mind that they’re just like you, in all the ways that matter anyway. It’s just a bit easier to see them as a person who somebody loves, with a complicated life, and an even more complicated mind.

It’s not much, but it could be enough to remind you that there’s a person behind those words, and that there’s a lot more going on in their minds than you know.

And the more you love your enemies, the fewer enemies you will have. Everybody wins.

Read more:
The “least of these” on the internet