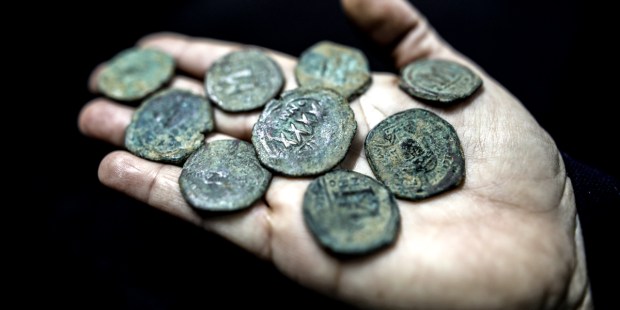 Newly discovered coins that lay hidden for 1,400 years offer a glimpse into Christian life in the Holy Land right before life changed drastically.

As crews near Jerusalem renovated a highway, workers came upon a long buried village, and archaeologists soon had more artifacts to add to an already enormous trove of items that tell the story of Christ and his followers in the Middle East.

Earlier this month, Israeli archaeologists announced the discovery the village, believed to be called Einbikumakube. Inside the walls of a building there was a rare cache of Byzantine-era coins. They are believed to be from around 604-609 because of the images of the emperors they bear.

“These coins give us a rare look into this Christian ancient world,” said archaeologist Annette ­Landes-Nagar.

The Washington Post said that the coins were probably placed in the walls of the building “around 614, toward the end of the period when Persian armies invaded the Holy Land, destroying churches and Christian communities, just before the rise of Islam in the area.”

“The hoard was found among large stones that had collapsed alongside the building. It seems that during a time of danger the owner placed the coins in a cloth purse that he concealed inside a hidden niche in the wall,” she said. “He probably hoped to go back and collect it, but today we know that he was unable to do so.”

At a time when the Christian presence across the Middle East is diminishing and believers often face persecution, archaeologists in Israel say that more than a third of the roughly 40,000 artifacts found in the country each year are linked in some way to Christianity.

It’s a potent point, offering proof of the Christian connection to the Holy Land and the Middle East, alongside that of Judaism and Islam.

With all that’s been discovered in archaeological digs, Gideon Avni, head of archaeology at the Israel Antiquities Authority, believes archaeologists can accurately reconstruct Jesus’ life from the Church of the Nativity.

Eugenio Alliata, a professor of Christian archaeology at the Franciscan biblical school in Jerusalem, said that “what has been found to date corroborates biblical accounts of Jesus’ life and puts his existence into a real context,” according to the Post.