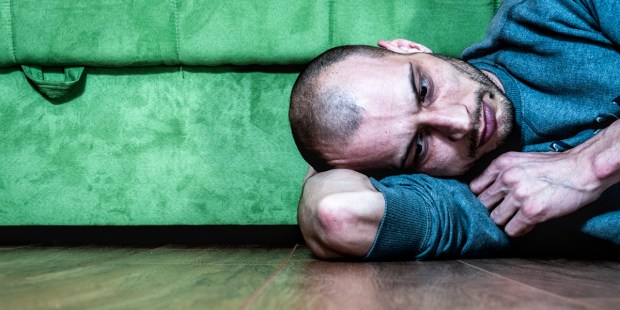 By not asking others for help, I was depriving them of such warmth.

Here in the United States, we like to believe in the “American can-do spirit.” We are filled with faith in ourselves, confidence in our abilities and the strong will to achieve great things. Plus, we firmly believe we can do it on our own.

When adversity strikes – such as, in my case, clinical depression, or some other mental illness – we might struggle to achieve anything at all, much less do it on our own. Suddenly, we find ourselves feeling inadequate at best, a complete failure at worst. The last thing we want to do is ask anyone for help. And the next-to-last thing we want to do is offer our help to someone else, since we don’t feel at all capable. I have a piece of advice about that:

Ask for help. And offer help.

Those are definitely two sides of the same coin. Said St. Augustine: “You cannot attain to charity except through humility.”

The humility, the “asking” part, doesn’t come naturally for most of us. My wife and I pridefully have learned that during the last 15 years, since I received my diagnoses of major depression disorder and severe anxiety disorder.

Donna and I both are the eldest of our siblings. We grew up hearing that we could be anything we wanted in life, that we had enough intelligence and talent to do whatever we wanted, and do it better than most people. That served us well when times were good and even when normal challenges came along. I graduated from college in three years. I ended up with the career of which I always had dreamed. We had four children while we were both still in our 20s, but were good parents and somehow kept up with all the craziness of family life in a busy home.

During the winter of 2001-02, my depression and anxiety bubbled to the surface, then turned into a full-blown volcano. Suddenly, we had no clues about where to turn or what to do. I quit my job and felt adrift. We took the advice of doctors and tried to learn what we could about the illnesses. But the process of coping with daily life turned into a greater chore than it ever had posed during the first 15 years of marriage and parenthood.

Not only did we refrain from asking anyone for help, we kept it a secret from most of the world. Our parents and siblings knew. But we frequently declined dinner invitations with apologies and an excuse. We often left parties early. I occasionally didn’t make it to work, and sometimes Donna had to leave work early.

Good and faithful Catholics all our lives, dedicated to ministering to others, wealthy in the love of so many friends and so much family — so much in life stopped making sense for us, so many hopes and plans wafted away.

“Do you wish to rise? Begin by descending,” St. Augustine also said. “You plan a tower that will pierce the clouds? Lay first the foundation of humility.”

God sent us the humility proactively. In 2005, I shared my secret with some men on a retreat. That next year, I took six weeks of leave from work so I could receive a series of electro-convulsive therapy treatments — you might know it as shock therapy. I still start to cry when I think of that time. I couldn’t be left alone on the days of the treatments, so my parents watched me while Donna went to work — like I was their little boy again. And those men from the retreat organized friends from our parish to bring dinner to us regularly.

Read more:
How the aftereffects of shock therapy helped me identify with the Baby Jesus

Donna broke down and told two of our dearest friends about my illness and they demanded that she let them help somehow. Reluctantly, Donna agreed to Kathy cleaning our bathrooms and Mike replacing some broken doorknobs. Embarrased, I stayed in my bedroom the entire day.

Offers of prayer, phone calls and cards soon overwhelmed us. A few years later, during a particularly dreadful episode for me, Donna and I arrived home from attending Mass. As we pulled into the driveway, I noticed our lawn looked shorter. I hadn’t had the strength or energy to mow the grass for quite some time, something about which I had felt ashamed. I looked to my right and saw a friend of ours, who lives about two blocks away, pushing a mower.

“Humility, which is a virtue, is always fruitful in good works,” said St. Thomas Aquinas.

I remembered the warm feeling I used to get when I helped someone in need, especially family and friends in whom I had so much love invested. By not asking others for help and not even wanting their assistance, I was depriving them of such warmth.

“Do nothing out of selfishness or out of vainglory,” St Paul wrote to the Philippians, “rather, humbly regard others as more important than yourselves, each looking out not for his own interests, but (also) everyone for those of others.”

We always had tried to reach out to others in the past, but now we sensed an immediacy, an urgency. Donna and I decided to notice all the people in our lives who needed anything that we might provide. A seat at our table Christmas morning, devoted prayers, a friend to talk, assistance during a health crisis, time to talk about our experience with mental illness …

“Give! Give the love you have received to those around you,” St. Teresa of Calcutta said. “You must love with your time, your hands and your hearts. You need to share all that you have.”

That’s not something we can do by ourselves. None of us can. We need each other.

Read more:
Feeling inadequate to the task before you? Here’s the saint for you