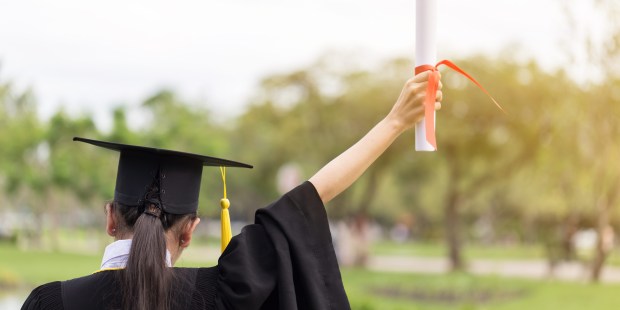 The rest of us don’t have to quit entirely, but we might want to try watching more ‘intentionally.’

For those of us who spend a fair amount of time zoned out in front of the TV, it’s worth wondering what we might accomplish if we put those hours of screen time to better use. For Teal Burrell, incredibly, it meant not only earning a PhD, but also completing a marathon in a time qualifying her for the U.S. Olympic trials. “In my newly discovered spare time, I also read 35 books, a personal record,” she writes in a Washington Post article. “Could I have done all that without giving up TV? Maybe, but I’m doubtful.”
Read more: Is your smartphone your addiction or your antidote?

Burrell made the admirable decision to part ways with her TV watching as a New Year’s resolution. She explains, “I realized—despite feeling constantly frazzled and busy—that I wasted hours clicking through shows I barely liked or bingeing on series I’d already seen.” Few of us TV watchers can’t relate. This realization, along with having several significant goals she longed to achieve, was enough to make up Burrell’s mind. “Despite a lifetime of failed New Year’s resolutions, I started on January 1, 2014.”

One of the first things she noticed was an increased appreciation for her weeknights. “I didn’t automatically collapse on the couch only to look up hours later, surprised so much time had passed.” Evenings tend to be an ideal time for us to be productive at home since most of us are free from work duties and our little ones are in bed.

Unfortunately, we frequently find ourselves so fried from the day’s activities that TV viewing becomes our pre-bedtime routine, soaking up precious time and attention. “Sans TV, evenings seemed longer,” Burrell declares. “And I actually got to bed on time.”

She admits that there were times, particularly in the midst of exhaustion, when all she felt like doing was consuming mind-numbing television. Still, Burrell stayed strong and by the end of the year, she’d accomplished every one of her “TV-free-year goals.” Today, she says she no longer avoids TV completely but when she does watch, it’s with intention, which is how the rest of us ought to be doing it, too.

According to Dr. Ken Buckle, psychologist and founder and president of Gratia Plena counseling in Texas, having the television on for no real purpose but simply as a means of filling the silence can be psychologically harmful. “There are all kinds of problems with having the TV on all the time and soaking in information,” he acknowledged. “I think it’s one of the factors that’s raising anxiety.”

Too often, the television robs us of opportunities to savor those rare periods of silence, which we need more than we may realize. “Our world is full of noise and it disrupts our serenity,” Dr. Buckle explained. “Having silence is important for psychological and spiritual growth. It’s an opportunity for us to connect with ourselves and to be comfortable with ourselves.”

Of course, TV in and of itself is not destructive and can actually be quite uplifting and even educational. The key is to be intentional about what and how we watch as opposed to mindlessly channel surfing and allowing the screen to take the reins.

Read more: Letting the baby have screen time can enrich your family life

In order to take TV viewing from habitual and inefficient to intentional and beneficial, Dr. Ken suggests the following steps:

1. Be aware of how your current watching habits are negatively impacting you. “They have to have some awareness that there’s an issue or they probably won’t take any action to change it,” he stated.

2. Prepare ahead of time what you’re going to watch, particularly if it’s going to be during the evening. “What happens is we—in our American culture—tend to do too much,” Dr. Buckle explained. “So by the time the evening comes around, we’re completely exhausted and it’s too difficult to come up with a plan at that point.” Research what’s on, decide whether you are looking for laughter, knowledge or just  plain relaxation, he says.

Whatever our intentions with TV watching, it’s important to know what they are as opposed to thoughtlessly turning on the screen and devoting extensive hours of our lives to it. We may even wind up like Burrell. Maybe not by earning a PhD and qualifying for the Olympic trials in a single year, but in realizing, as she did, that TV is best experienced in small, intentional doses.