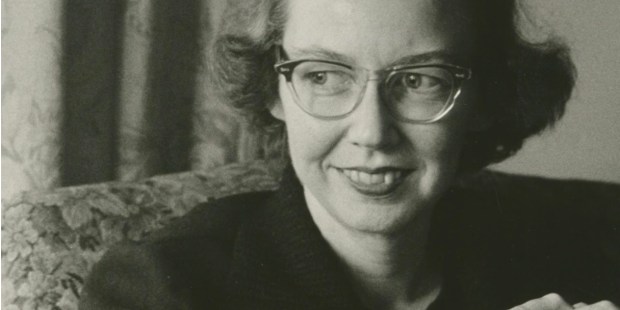 Get to know the author a little better with these 6 lessons from her life and works.

This past month, Uncommon Grace: The Life of Flannery O’Connor debuted on PBS. The documentary follows O’Connor through her upbringing in the 1930s, her time at the Iowa Writers Workshop, and her affliction with the disease of lupus and death at age 39. The Catholic writer seems to be gaining popularity right now, and another documentary is also in the works, called Flannery O’Connor: Acts of Redemption. Jesuit priest and documentarian Mark Bosco says that his upcoming film “tells the story of this great Southern, Catholic writer and her contribution to American arts and letters … She is the most anthologized American short story writer in the nation, with her signature story, ‘A Good Man Is Hard to Find,’ taught in schools around the country.”

But in spite of her writing success, she isn’t all that well known. Bosco says, “Even still, O’Connor’s legacy in American literature remains grossly understated.”

It’s surprising that this is the first ever feature-length documentary about her because her life story is fascinating, from her birth in Georgia and precocious childhood (she taught a chicken to walk backwards and was featured on the local news), to her time as one of the only women at the prestigious writing school at University of Iowa, and back to her long battle with illness. And a viewer can’t help but be impressed by the life of the woman who became a master of the short-story genre of fiction.

Read more: 6 Ways to tune out distraction and be more attentive

On second thought, perhaps it isn’t all that surprising, because O’Connor has always defied stereotypes. Although her writing is beloved by some, by many others it is misunderstood and labeled as overly dark and violent, leading critic Robert Giroux to say, “They all recognized her power but missed her point.” Filmmaker Bridget Kurt hopes that her documentary will bridge the gap between writer and audience, saying, “Once you know Flannery O’Connor’s point of view, it’s so much easier to pick up her stories and understand them.” By understanding both the woman and her stories, we encounter examples of how truth oftentimes lies under our preconceptions.

We continue to struggle with our stereotypes and often overlook the goodness that is right in front of our eyes. Even though O’Connor died in 1964, her life and work continue to provide a refreshing change of perspective. If we take the time to get to know her, she will inspire us today.

“Serious” writers are supposed to produce novel-length masterworks. O’Connor did write two novels but is best known for her short stories such as “A Good Man Is Hard to Find,” “Good Country People,” and “The Displaced Person.” Because of her lupus, she didn’t have energy to write for long stretches at one time, so she adjusted and began writing shorter pieces. At the time, short stories weren’t the typical way a writer would achieve critical acclaim, but she proved that whatever our chosen task or limitations, we can be great.

2. How to see beyond the stereotype

Because Flannery was a woman and had a thick Southern accent, her professor in college read her stories out loud to the class for her. He was worried that if she read them herself, they wouldn’t be taken seriously. During her career, she stood out as a woman writer who tackled difficult topics such as racism, murder, and death. No matter the topic, she showed that it bears thinking about even if the questions we raise are uncomfortable and challenge us to keep an open mind.

As a woman writer who was underestimated, she knew that sometimes the truth is spoken by those who otherwise seem uneducated or uncultured, who speak with funny accents, or even in some cases by murderers such as The Misfit in “A Good Man is Hard to Find.” Today, we continue to struggle with issues of class and social stratification, we tend to overvalue a certain educational pedigree or look at certain people who dress well or live in certain areas as having more valuable contributions to make to our culture, when in fact, each person has something valuable to contribute if we only take the time to listen.

More to read: 9 thoughtful books on faith and humanity

3. That God is with us all the time

Religion is often thought of as tame and respectable, but in O’Connor’s world it is shocking and unexpected, and God’s ways may even seem strange and wasteful. She was Catholic and yet her writing is full of violent characters and shocking twists worthy of being made into horror movies. For her, religion isn’t for the faint of heart, and the appearance of grace in the life of a person might disrupt it forever. So offbeat did her description of religion and sin seem that when her book Wise Blood was published, her aunt felt compelled to write an apology note to the local priest. This description of religion is actually quite insightful because it means that God is with us even in our darkest moments.

4. That creativity has no limits

After graduating from the Iowa Writers’ Workshop, O’Connor relocated to New York City so she could sharpen her pencil alongside the other talented writers of the time. She didn’t last long, though, as she quickly began to show the symptoms of lupus, the same disease that killed her father. She was forced to retreat home to Georgia to live with her mom on the family farm. Although she wasn’t a recluse, her typical day was small town farm life. That didn’t halt her imagination, though, and she turned her limited environment, including the distinctive Southern personalities with their intensely regional dialects, into a great variety of people and places in her fiction. No matter our circumstances, we can find a way to fold the bad into the good.

5. That everyone’s voice can be heard

From her early school days, O’Connor was a quiet person. She did have friends but never left much of a lasting impression beyond her immediate circles. She may have been quiet but her writing shouted. She once explained, “For the hard of hearing, you shout.” Through her gift at communicating loudly on the page, she was able to provoke questions about human goodness that still linger with us today. However each of us is most comfortable communicating, we can make ourselves heard.

6. That suffering does not have to be a setback

When she received her diagnosis of lupus, O’Connor knew it was a death sentence, but she didn’t let it disrupt her life and never publicly complained. Instead, she turned her suffering into great writing. Her firsthand experience with pain and the evil of disease shows in her writing, and she turned her weakness into strength. Other than Wise Blood, all of her major works were written while she was in the grip of illness, and perhaps this is why they all seem so vital and powerful.

For all she knew, each work may have been her last. In fact, when she visited the famous healing pool at Lourdes and had the chance to pray for healing, she chose instead to pray for time to complete her second novel, The Violent Bear It Away (she did finish it). Life may not always be comfortable or follow our chosen path, but the human soul can become great despite any setback. O’Connor puts it even more strongly, writing, “Evil is not a problem to be solved. It is a mystery to be endured.” By this she means that even though it is difficult, we can become great not in spite of suffering but because of it.