John Paul II: He showed us holiness was not only possible but exciting 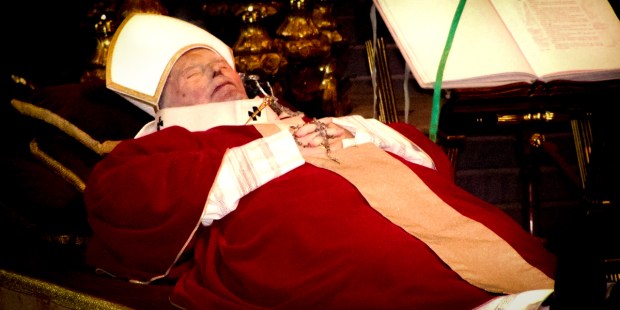 One of the JPII generation pays tribute to the saintly pontiff.

On, April 2, 2005, I was standing in St. Peter’s Square praying for our very frail Pope John Paul II.

Along with thousands of others, I had gathered to pray a Rosary led by a few cardinals. The prayers reverberating across the Square were a testimony from the throngs that had come to keep vigil, as we anticipated that our Papa was about to depart for his heavenly home.

He had a great love for the youth and his last words to us that evening were, “I have looked for you. Now you have come to me. And I thank you.”

We indeed had come to look for him, to say goodbye.

At 9:37 p.m. the light in his papal apartments went dark. The light that had always shined until the late hours of the night, had finally been extinguished.

The bells of St. Peter’s began to toll: 84 times for the years he had spent as a pilgrim on this earth. He had finally returned to “the Father’s house.”

Six days later I found myself looking across St. Peter’s again. The ocean of people stretched all the way down Via della Conciliazione and passed the Tiber. The people joyfully exclaimed, as their many signs read, Santo Subito! Sainthood Now!

St. John Paul II had already been canonized in millions of hearts around the world. His life had been proof that holiness was possible, even in our modern world.

I came to know John Paul II during the 2002 World Youth Days in Toronto. I had just returned to the Catholic Church after many years of searching. For most of my life, my faith had been nothing more than a cultural identity. However, it was in the Church of my birth that I had finally found the answers to the deepest desires of my heart. The words of the Church, echoed through the Pope, had awakened a new yearning in my heart:

It is Jesus that you seek when you dream of happiness; He is waiting for you when nothing else you find satisfies you; He is the beauty to which you are so attracted; it is He who provoked you with that thirst for fullness that will not let you settle for compromise; it is He who urges you to shed the masks of a false life; it is He who reads in your hearts your most genuine choices, the choices that others try to stifle.

The deep yearning was to live out holiness; to live out the radical call to love. It was a desire to have a real relationship with the God of Creation, with Jesus Christ. My restlessness had finally ceased.

As night had fallen on the muddied field in Downsview Park, I couldn’t help but contemplate this unimaginable sight. Almost 1 million young people had gathered around an 81-year-old frail man. The chanting alone would confound any onlooker. The young people shouted in unison, “J-P-2, we love you!” His response? A tender smile full of love as he bobbed his fallen head to the rhythm of our passionate voices.

His words to us were of bold encouragement, radical holiness and hope.

You are our hope, the young are our hope. Do not let that hope die! Stake your lives on it! We are not the sum of our weaknesses and failures; we are the sum of the Father’s love for us and our real capacity to become the image of his Son.

He showed us that holiness was not only possible but exciting. His love and confidence animated us and pointed us towards Christ.

Two years after that extraordinary encounter, I’d packed my bags and left for Rome to study Theology. The faith that had once been a series of milestones had now become my life, my identity. I thirsted to know more. The Church came alive in Rome. Rome was my classroom and the Holy Father was my favorite teacher. What I most desired was to meet the 264th successor of Peter. Yet, seven months later, I found myself standing on St Peter’s bidding him goodbye.

After the bells tolled 84 times, we all returned home with heavy hearts. We were orphaned. Our Holy Father was no longer there to encourage us. The Chair of Peter was empty.

A few days later I would receive a gift that would mark my life forever. I was asked to be a lector (in Spanish) for the Exsequiis Pontificis, the papal funeral. I was speechless and moved to tears. Finally I would get to be with my Papa!

And so on April 8, “santo subito” rang out like a beautiful hymn across St. Peter’s Square. I saw before me a torrent of God’s mercy in the millions of people who had gathered from all over the world. As I read the reading from the Acts of the Apostles (10:34-43), I thought of the many early Christians who had given their lives in this very place. Like St Peter, I, too, had found the one who had “the words of eternal life.” (John 6:68) It was precisely in giving my life to Christ that I had found it.

Our Holy Father had shown us true self-giving in the way he had led the Church for 26 years.

As I finished the reading, I had an overwhelming sense of the presence of the Holy Spirit. I walked back to my seat and contemplated the hundreds of religious and world leaders who had convened here.

How could it be that the head of the Catholic Church had touched so many lives? Why were they here? I could only come up with one explanation.

I sat down and peered in the distance and thought, they had seen in St. John Paul II the very presence of Christ. “He [Christ] was the beauty to which they were so attracted.”

St John Paul II had accomplished his mission. Now the pope who had been called from a faraway land would do his most important work from heaven.