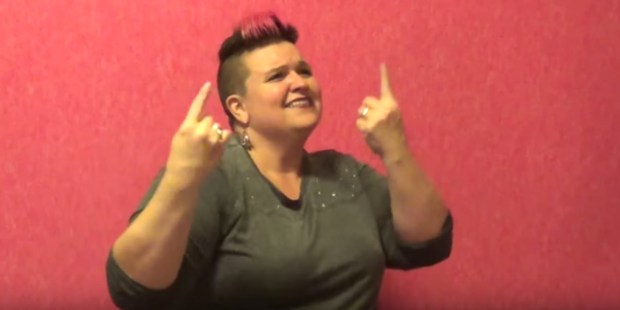 Innovative interpreters are making visual music for the Deaf, and it’s fantastic!

I don’t know about y’all, but I love music. I can’t carry a tune in a bucket, but I totally rock out to everything from The Pogues to Eminem. Music is like emotional medicine—it can instantly change your mood, cheer you up, and remind you that life is beautiful (and fun!).

I’ve watched American Sign Language (ASL) interpreters at various events, and I always noticed them pointing up when music was playing and only signing when lyrics were being sung. I’ve often thought how unjust it is that there is no way to communicate the staggering range of “music” without hearing it, but it would never have occurred to me that there could be a way—someone just needed to create it.

Read more: Inspiring 6-year-olds learn to sign for a classmate

Amber Gallaway Gallego did exactly that. In a recent Vox interview, she tells how she found a way to communicate the sound of music using elements of ASL, particularly non-manual markers.

About three minutes into the video, she explains how she created the visual sound of the bass guitar using the ASL sign for fat or thick. There are three elements of the sign: the hand motion, the placement of the motion (over the low torso), and the facial expression—a puffing up of the cheeks. The video then shows her signing a guitar riff onstage at a Red Hot Chili Peppers concert, and she totally nails it. It’s incredible how you can literally see the motion of the music.

Equally fascinating is the way she explains translating lyrics, particularly metaphor and wordplay. For metaphor, she uses similar expressions from ASL to convey the same idea in the same tone as the lyrics. For wordplay, she combines two signs that don’t normally go together to express the play on words and fusion of ideas.

Read more: Foster father's great love: 'I know she can't hear, but I always talk to her'

Since the 1990 passage of the Americans with Disabilities Act, concert venues have been required to hire interpreters to translate for deaf attendees. But for too long most of them have simply signed the lyrics, despite the fact that many in the Deaf community have residual hearing in a certain range—and even for those who don’t, everyone can feel the vibrations of music at a concert. Deaf individuals know there’s more going on with “music”—they’ve just been waiting for someone to show them what music is, and Gallego finally did it.

This is a huge advance for the Deaf community, and I hope that learning how to sign music becomes part of training for every ASL interpreter. Vox is right that “it’s vitally important that concert venues hire interpreters who understand the emotional power of music,” but that should be expanded to include churches, universities, orchestras, ballets, musical theaters. Anywhere and everywhere that music is used to create an emotional atmosphere, that atmosphere should be made accessible to everyone in the audience. As Gallego says at the end of the Vox video:

“That’s the whole reason to go to music events, to be a part of this experience and forget about the rest of the world and be there in that moment, and so many times deaf people are not allowed that experience because we as hearing people choose to say no.”