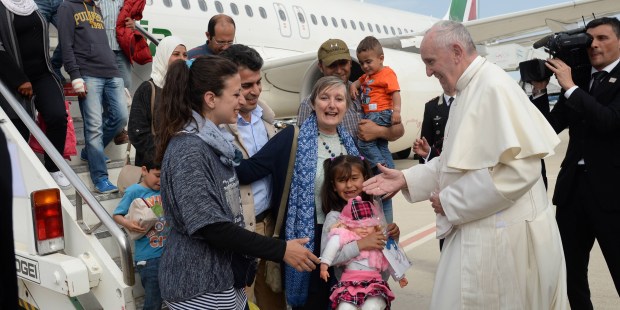 Two of the families are Christian, one Muslim

The two Christian families arrived in Italy in March. Both families suffered “kidnapping and other forms of discrimination because of their faith,” the Vatican statement said.

The first family includes a mother with two teenage children, a grandmother, an aunt and another Syrian woman living with them. The second family is a young couple, whose first daughter, Stella, was born just two weeks ago. According to the statement, the mother “was abducted for several months by ISIS and now, in Italy, has found serenity.”

The third family, which is Muslim, was the first to arrive in Italy, back in February 2016. The family of four includes two parents and two children. The children are attending elementary school, while the mother is enrolled in a degree course for “intercultural mediators” and has also recently begun an apprenticeship for employment.

Three Vatican apartments — located outside the Vatican walls — have been used for more than a year to house three initial Syrian refugee families, who arrived in Italy “through the humanitarian efforts promoted by the Sant’Egidio community, the Federation of the Evangelical communities in Italy, and the Waldensian community.” Now that the first three families have become independent, the apartments were free to host three new families.

The effort comes after Pope Francis made a special appeal, on September 6, 2015, to house a refugee family in every parish, religious community, monastery and shrine. Since then, 70 families (145 people in total) have been hosted in Rome.

In addition to ensuring that they are welcomed by parishes, communities and associations, volunteers also help the Syrian families to become integrated, first by helping them to learn the Italian language.

The Holy See is also providing financial support to another 21 people who accompanied Pope Francis when he returned from the Greek island of Lesbos in April of 2016. They are being hosted in private homes and by religious congregations.