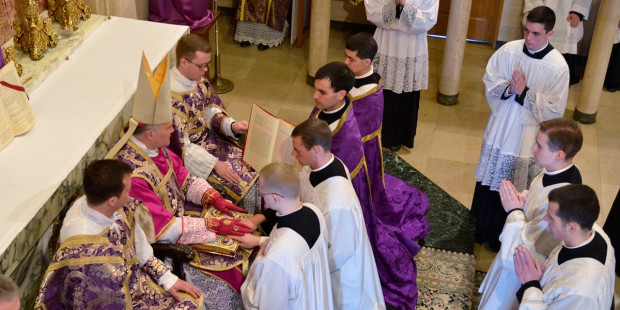 Is a new Personal Prelature on the horizon?

VATICAN CITY — The Holy See has established new provisions for the celebration of the Sacrament of Matrimony for members of the faithful who are attached to the Society of St. Pius X (SSPX), the Vatican announced today.

According to a letter signed on March 27 by Cardinal Gerhard Müller, Prefect of the Congregation for the Doctrine of the Faith, and Archbishop Guido Pozzo, secretary of the Ecclesia Dei Commission: “The Holy Father … has decided to authorize Local Ordinaries the possibility to grant faculties for the celebration of marriages of faithful who follow the pastoral activity of the Society.”

The Pope’s decision follows a proposal by the Congregation for the Doctrine of the Faith and the Ecclesia Dei Commission.

Archbishop Pozzo today told the French news agency I.Media: “This measure aims to reassure the consciences of the faithful who want to have their marriage celebrated by a priest of the Society of St. Pius X, and thus avoid doubts about its validity. For among Catholics, marriage always demands respect for the canonical form. It is therefore a special attention to the bonum matrimonii [goods of marriage], which is a right of the Catholic faithful,” he said.

The granting of the faculties for the celebration of marriage is subject to several provisions.

“Insofar as possible,” the letter states, “the Local Ordinary [that is, normally the local Diocesan Bishop] is to grant the delegation to assist at the marriage to a priest of the Diocese (or in any event, to a fully regular priest), such that the priest may receive the consent of the parties during the marriage rite, followed, in keeping with the liturgy of the Vetus ordo, by the celebration of Mass, which may be celebrated by a priest of the Society.”

In other words, a diocesan priest in good standing is to preside at the celebration of the marriage itself, which in the extraordinary form of the Roman Rite takes place before the nuptial Mass.

The Mass itself may then be celebrated by a priest of the SSPX.

However, the letter also foresees that circumstances may exist where those provisions are not possible, or where no Diocesan priest is able to receive the consent of the parties. In such cases, the Pope allows the Ordinary to grant faculties to the priest (of the SSPX) who will celebrate the nuptial Mass.

Cardinal Müller closes his letter expressing his conviction that “in this way any uneasiness of conscience on the part of the faithful who adhere to the Society of St. Pius X as well as any uncertainty regarding the validity of the sacrament of marriage may be alleviated, and at the same time that the process towards full institutional regularization may be facilitated”; and that, to that end, the Pontifical Commission Ecclesia Dei ‘relies’ on the cooperation of the prelates of the Episcopal Conferences concerned in this matter.

The new provisions are part of a number of ongoing meetings and initiatives aimed at bringing the Society into full communion. They follow on the Holy Father’s decision, in the Year of Mercy, to grant all priests of said Society the faculty to validly administer the Sacrament of Penance to the faithful (Letter Misericordia et misera, n.12), such as to ensure the validity and liceity of the Sacrament and allay any concerns on the part of the faithful.

Archbishop Pozzo says he sees the recent gestures concerning the sacraments of Penance and Marriage as a new step towards the reconciliation and regularization of the SSPX, whose rupture with Rome dates back to 1988.

Asked what obstacles still remain to reaching agreement, in light of the new provisions, Archbishop Pozzo said: “In order to achieve full reconciliation, the Superior of the Society of St. Pius X must sign the Doctrinal Declaration [essential doctrinal elements defining Catholicity and considered as preconditions for an agreement].” Regarding this, Pozzo said, “I do not think that there remain difficulties.”

Furthermore, Pozzo said: “What the Society of St. Pius X asks is to be able to fully retain its spiritual, disciplinary, theological and pastoral identity, with the development of its own statutes, which will contain its particular laws and allow it to be erected as a Personal Prelature. I hope that all this will happen soon.”