What King Solomon’s example teaches us about real ‘success’ 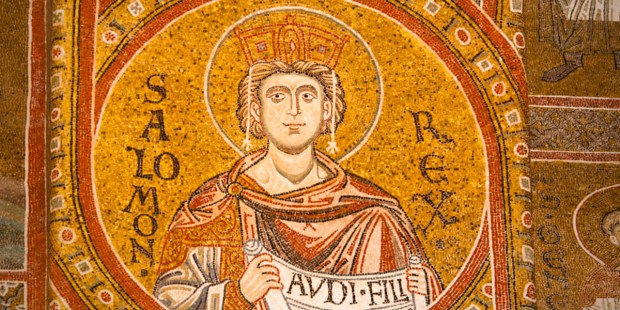 There was never a wiser ruler, but he made one fundamental mistake.

I was still a young girl when I first heard the story of the Wisdom of King Solomon. The tale of two mothers who fight for a child and the wisdom of a king who understands human emotions and knows how to bring out the invisible truth made a huge impression on me.

Since hearing that story, I prayed every day to be like King Solomon, but recently I returned to his story with a new understanding: that Solomon is not necessarily the best example to follow when it comes to “success.”

Wisdom is a challenge

We often hear about the saints whose greatness was based on their small and normal lives. They were often the object of contempt (St. Faustina) or misunderstanding (St. Francis), but they led an incredible life with God, invisible to other people. Not everyone was so lucky. St. Thomas Aquinas was an absolute intellectual genius. He freely quoted from memory philosophical treatises and was admired by all, yet he never considered himself better than others.

Solomon’s life seemed to be on a magnificent course. He was the son of the famous King David, and when he was presiding over Israel he could have asked God for anything, but he chose wisdom and knowledge instead.

For a long time he ruled justly over people who were weak, poor, and disenfranchised. Using power, recognition and his spotless reputation, he helped those that no one else cared about.

Solomon reminds me that people who are considered an authority don’t have an easy life, especially if they are wise. They have an opportunity to use their position every step of the way. They could easily feel more important than the rest of the world. Standing in full humility before the truth about yourself is a testament to true wisdom.

We don’t do things cheaply for God

At the request of God himself, Solomon built a temple for Him. He did it in the most beautiful, best, and most expensive way possible. We can learn from that. The temple was built with stone blocks and finished with cedar and cypress, the most expensive types of wood. The carved buds and flowers were plated with gold, as was the floor in all rooms and the cherubs carved into olive tree wooden door. Even the chains were gold-plated. The work took seven years to complete and was the absolute pride and joy of the king of Israel.

Read more: Why I need to believe in guardian angels on earth

For me, it is a simple message. What I do for God has to be of the best possible quality. Build it just like Solomon did.

During the reign of Solomon, Israel became a superpower. His wisdom, intuition, knowledge, and commitment to work with other rulers resulted in healthy coffers and well-fed people.

That’s another thing confirmed by Solomon’s life and rarely mentioned by the Church: success is good. Earning lots of money and having a high-powered position aren’t bad things. The danger does not lie in success; it is within us. As long as God rules our life, our earthly abilities serve His glory and are good. The problems start when instead of trusting God, we start trusting our power and strength.

Sadly, Solomon’s rule took a downward turn over the years. He started to use Israelites for slave labor — so much so that they were not treated much differently than Israelis in Egypt. Also, he married women from other countries and faiths and in time started following their religious traditions. He started worshiping other gods and built places of worship for them.

His only task was using his wisdom for justice, but instead, he focused on achieving more success. Eventually, he stopped fighting for his time with God, stopped listening to him, and he drowned his conscience.

Read more: The daily prayer that can change your life

Solomon’s sins were not unheard of among the Israeli rulers. King David did terrible things. He killed the husband of a woman he desired so he could marry her. But every time, with humility and in tears, he came back to God.

His son, Solomon, did not.

God gives us more opportunities than we deserve

Nevertheless, God was still waiting for him. He appeared to him twice, forbidding the worship of other deities. Both times, He gave him another chance.

But Solomon did not listen, and he continued to worship the deities of his wives (he’d had a thousand of them). Finally, God threatened to take Israel away from his family, but because of David, he would only do it during the reign of the next ruler.

Not only did God give Solomon more chances, but he didn’t even punish him, all because of his father, who was not so innocent himself! How much God must have loved them both!

The wisest man without God can only hurt others

Read more: Prayer was the missing link in my fertility struggle

God wants the best for us, even if we fall. This does not mean that wrongdoing has no consequences; they are often much bigger than we suspect and they affect other people. That’s why God wants us not to avoid mistakes and asks us to think beyond ourselves when we make choices. When we sin, we always lose something. It’s not a punishment; it is a necessary consequence of the decision we make under the influence of evil.

It’s worth it to come back

Solomon missed the moment when his wisdom became his god, instead of God himself. I am pretty sure that every one of us makes that same mistake sometimes. We all have gifts that can easily be considered as obvious and the reason for our—not God’s–glory.

Learning from Solomon’s example, we can be sure of one thing: It is worth it to come back. Even if it seems that our errors have gone too far. Perhaps especially then.