Are clothing stores lying to women who wear a size 8 or more? 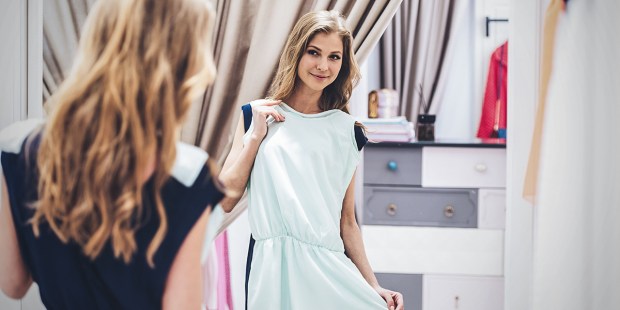 We should find a better way than “vanity sizing.”

A WaPo article on vanity sizing in women’s clothing went viral recently, with this sentence as the highlight: “A size 8 dress today is nearly the equivalent of a size 16 dress in 1958.”

The male author did follow that up with the explanation that a size 8 in 1958 doesn’t have a modern-day equivalent, being smaller than today’s 00, but nearly everyone (including me!) stopped reading at the first sentence. Women in 1958 were literally half our size, I thought to myself. We are so fat. How did we get so fat? I mean, were they hobbits? Are we really that fat? Were they really that thin?

I noticed this particular article because in the past few weeks, I’ve been spending more time than usual clothes shopping. Not because I’m raking in the cash, but because I’ve finally been forced to buy new clothes after dropping 30 pounds. I keep describing my shopping trips as “disorienting” to my husband, and it’s not just that I’m buying smalls instead of larges. It’s that no matter which store I go into, I keep buying the same size.

Read more: I'll never forget the moment I realized I was fat

This has not happened since I was a child. I’ve never been able to walk into a store, pick up a pair of jeans in “my size” and buy them, knowing they would fit when I got home. And I’m certainly not alone.

Not long ago, Time magazine gave a detailed history of the practical and psychological reasons for the current disastrous state of women’s clothes sizing. Their graphics and charts are particularly helpful—next to the juxtaposition of sizes (1958 = 8 and today = 00) is a picture of Twiggy, and anyone who knows anything about fashion knows that Twiggy revolutionized women’s fashion precisely because she was so thin.

Even writing about women’s sizing is a head game … but, as I’m learning, it’s only a head game if you’re of a certain size.

Read more: Why looking great has nothing to do with dieting

I spent years shopping at certain stores because of the sizing. After my first baby was born, I learned that Target’s clothes section was no longer welcoming—it became a place of bitterness and self-loathing, where I couldn’’t squeeze into a size 16. At Kohl’s, though, I could wear a size 10 in Jennifer Lopez’s “curvy” brand. I liked Rock & Republic better, but I only tried their jeans on once. It’s demoralizing to huff your way into a size 14 when you’ve just celebrated how easy it was to pull on those size 10 skinny jeans.

After going down a few sizes, it took me nearly a month to realize that things are different when you’re smaller. In every store I would grab mostly medium tops and size 8 jeans. At first, I was shocked when I kept having to go down a size. But then I started to realize that the smalls and 6s always fit—in every store. Even JLo’s “curvy” brand had me as a 6, which meant I dropped two sizes in her brand and four sizes in Rock & Republic.

Read more: 5 celebrity women who are standing up for their 'different' bodies

The litmus test was the long-eschewed Target. When I finally braved their clothing section, I psychologically prepared myself to fit into 10s and larges. I took a single size 6 into the fitting room.

The size 6 fit. I didn’t buy it because the styles are horrible now and half my butt hung out, but that was how it was supposed to fit. Around my waist, it was fine. The small shirts fit and the mediums were too big. The 8s were too loose around my waist. Contrary to Time‘s insistence that a size 6 can vary by many inches, it seems to me that if you’re a size 6, you’re a size 6.

Not so if you’re a size 12. And if you’re larger than a 14, God help you, because even though you’ll fit comfortably within the majority of American women, you will almost certainly have to shop in a special store or section. Most stores don’t carry sizes larger than 12—however arbitrary they might be.

Time asserts that vanity sizing works because we’re all a little vain, and I can’t deny that. But I have to wonder if vanity is the aim of “vanity” sizing, when it seems only to target those sizes our culture has decided are “plus.” If the majority of American women are being ritually—and unnecessarily—shamed by something as fundamental as buying clothes, it’s time to find a better way.