Pope Francis: Pay attention when you make the sign of the cross! 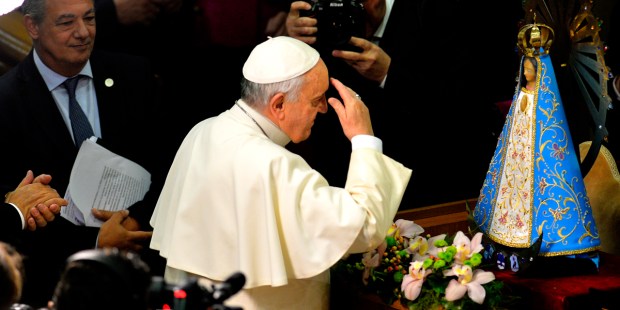 The gesture of blessing reminds us that good ideas and good will are not the source of salvation: “The only salvation is in the crucified Christ.”

Wearing a crucifix around our necks and making the sign of the cross shouldn’t be mindless practices, but constant reminders of the mystery of sin, the cross and salvation.

The pope offered this reflection Tuesday during his morning homily at Mass in his residence, the Casa Santa Marta.

The readings of the day recounted the story of how the Israelites were being bitten by poisonous snakes, and how God told Moses to make a bronze snake and mount it on a pole, assuring that whoever looked on it would be saved from the snakebites.

“The bronze serpent was the sign of two things,” the pope said, as Vatican Radio reported: “the sign of sin and the seductive power of sin, and a prophecy of the cross.”

The pope noted how St. Paul teaches that Christ took on the wounds of sin: “For our sake he made him to be sin who did not know sin.”

Pope Francis said we should ask ourselves what the cross means for us, and if we make the sign of the cross as a prayer.

The Church proposes “a dialogue with the Mystery of the Cross, with God who became sin for our sake,” he said. “Each of us can say He became sin ‘for love of me.’”

At Aleteia today, learn about the origin and meaning of the sign of the cross.