Why do Catholics make the Sign of the Cross before praying? 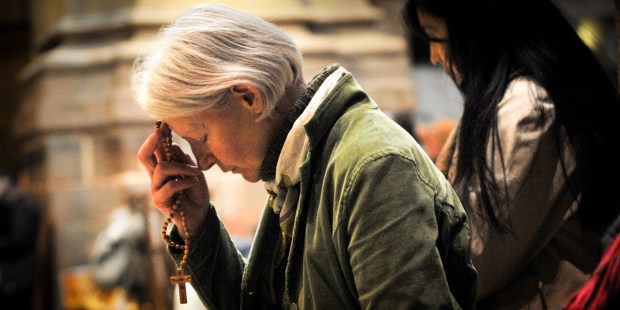 Is it some sort of medieval superstition?

When a group of Christians from different denominations get together to pray, it is easy to figure out who is (or was) Catholic. Instead of diving right into prayer by addressing God the Father, the Catholic uses his hand to trace a cross over his body or forehead.

Why is that? Is it some sort of superstitious ritual?

First of all, let’s look at the history behind it.

He then added, “In all our travels and movements, in all our coming in and going out, in putting on our shoes, at the bath, at the table, in lighting our candles, in lying down, in sitting down, whatever employment occupies us, we mark our foreheads with the sign of the cross.”

Saint Cyril of Jerusalem, who lived in the 4th century, noted in his Catechetical Lectures, “Let us then not be ashamed to confess the Crucified. Be the cross our seal, made with boldness by our fingers on our brow and in everything; over the bread we eat and the cups we drink, in our comings and in our goings out; before our sleep, when we lie down and when we awake; when we are traveling, and when we are at rest.”

It is believed this early tradition of marking one’s body with the cross was inspired by a passage in the book of Ezekiel where it says, “And the Lord said to him, ‘Go through the city, through Jerusalem, and put a mark upon the foreheads of the men who sigh and groan over all the abominations that are committed in it’” (Ezekiel 9:4).

In some translations of this passage it reads, “mark Tau upon the foreheads.” Tau is a letter of the Greek alphabet that is written as a T, and so the early Christians saw in it the sign of the cross. They believed that the sign of the cross set them apart and “marked” them as a chosen people who belong to the one true God.

The sign of the cross that Catholics make before prayer or any other activity is not meant to be a superstitious act, but an outward profession of faith.

Read more: Pope Francis: 'Pay attention when you make the sign of the cross'

The Catechism of the Catholic Church adds: “The Christian begins his day, his prayers, and his activities with the Sign of the Cross: ‘in the name of the Father and of the Son and of the Holy Spirit. Amen.’ The baptized person dedicates the day to the glory of God and calls on the Savior’s grace which lets him act in the Spirit as a child of the Father. The sign of the cross strengthens us in temptations and difficulties” (2157).

The cross is at the very center of what we believe and crossing ourselves is supposed to be a constant reminder of the price Jesus paid for our sins. It is both a profession of faith and a simple prayer that has such great power. According to Saint John Chrysostom, “wherever [demons] see the sign of the cross, they fly away, dreading it as a staff that they are beaten with.”

In the end, the sign of the cross is a simple gesture that has ancient and biblical roots. While it may appear that some Catholics make it superstitiously, it was never intended to be done in such a way. It recalls that profound sacrifice of Jesus 2,000 years ago and actively calls upon his aid to help us in our need.

[Coming soon: And why do we make the Sign of the Cross with holy water when we go into a church?]