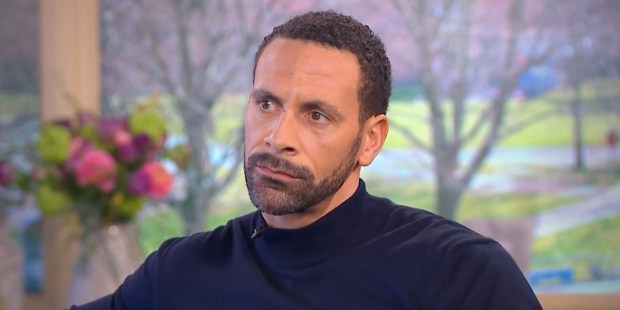 In ‘Being Mum and Dad,’ Rio Ferdinand opens up about losing his wife to breast cancer.

There is no go-to manual on how to cope when a beloved wife dies: some men may bottle up their emotions; some could fall into depression or take to vices like drinking or even contemplate suicide; while others may seek solace in talking with friends and family. And of course, some widowers might go through the whole spectrum of these experiences. One thing we do know for certain is that the grieving process is very personal and there is no deadline as to when it might end—a fact that the recent BBC documentary, Being Mum and Dad, demonstrates beautifully.

The program follows Rio Ferdinand, an ex-England soccer captain who had a hugely successful career at Manchester United, as he talks to other bereaved fathers and grieving counselors. The former defender, with a somewhat checkered past on and off the field, surprised viewers with his candid account of how he is still struggling with the loss of his wife, 34-year-old Rebecca, to breast cancer nearly two years ago.

In 2015, Ferdinand was approaching his retirement from soccer and said he was looking forward to throwing himself into other ventures (these are many, including his restaurant, his soccer foundation for deprived kids, and finally getting more time to spend with his family). But just before the end of his impressive career, Rebecca, who’d already overcome cancer a few years before, was diagnosed with an aggressive form of breast cancer. She died a mere five weeks later. At the close of his career, Ferdinand suddenly found himself dad and mom to three very small kids: Lorenz, now 10, 8-year-old Tate, and 5-year-old Tia.

Though Ferdinand has been known in the past as one of soccer’s “bad boys,” he has been widely praised for sharing his emotions on national TV, and for discussing his new family role on the morning TV show, This Morning. The star talked about his own childhood, explaining how he was taught “not to show any emotion, not to talk too much.” As a result, he grew up feeling that any sign of emotion was a weakness. But how do you contain these emotions when you’re confronted with such loss, especially when you know that you are responsible for helping three young children understand their loss and emotions too? As Ferdinand said, “For any parent to tell your children you’re going to leave the hospital and not see your mum ever again, it’s a hard thing to do.”

Read more:
“In sickness and in health…” This couple’s 5-day marriage “beat cancer.”

It’s clear that through his own experience Ferdinand has a lot of advice he can give to others, so we’ve listed a few key points from his documentary and further talk-show appearances that might help those confronted with loss themselves, or those helping the bereaved.

1. Don’t run away from the inevitable

Ferdinand expressed regret for not confronting his wife’s illness while she was still alive. Preferring to “steer away” from it as “defeat was never really an option. I didn’t think about defeat in my work life, and all I thought was getting over this.” He went on to say: “Advice for anyone, if you do come into this, talk to that person whilst they are still here because you will have many tormented nights after this wishing you could have said more, done more.”

2. Seek inspiration to get out of dark places

Ferdinand explained how for some months he turned to alcohol to try and dumb the pain. But his children were his source of inspiration to “try and make things work.” However, he adds: “I used to look at people or read stories and think, how can you be so selfish and commit suicide or attempt to commit suicide …” adding “but I can actually sympathize now because I understand that you get to places where you think, if I didn’t have that network of people or my kids who I use as an inspiration to be able to get up and think straight … and that’s when I started to become a bit more sympathetic when people do go to places that are dark places.”

Three or four days after his wife’s death, Ferdinand attempted the school run—often tough even in the most normal of times! He describes how he “woke up in the morning and I was scrambling around the house. They were late—it’s the first time they’ve ever been late for school because I was having a panic attack in the house. I’m having to go into a room on my own and sit there and go, ‘What happens now?’ And then I’ve got one of them in the car going, ‘Mum wouldn’t do this.’” He explains: “You just don’t know what to do.” But fast forward two years and Ferdinand has the school run nailed. Things will sort themselves out.

Read more: How to help a grieving friend

4. Talk about the past, present and future, and don’t hide emotions

Talking on Good Morning Britain after the airing of the documentary, Ferdinand was asked what advice he would give to John Frade, whose wife was killed in the recent terrorist attack in London while on the school run, leaving him to parent single-handedly their two young children. Ferdinand said: “There’s no denying that it’s going to be a hard period of time but what I’ve got from my journey is talking as soon as possible, to friends, to anyone who will listen, and just talking about the whole situation, your feelings, talking about the future, about a pathway for your children. But more importantly talking to your children. Let them see emotion, let them see you cry let them show times of weakness but also times of strength.”

Although Ferdinand seems to be managing well on the practical front, he knows he’s still grieving. “In a lot of my life I know I’ve not moved on. Like my wedding ring, I don’t see myself taking it off.” However, other widowers in the documentary “have said that was the thing holding them back from moving on in life. So maybe you need to do those things to breathe properly again.” Whatever you have to do the decision is yours, and it has to be one you are a comfortable with.

When a seemingly tough man comes out to reveal his toughest moments during a very personal experience we can only admire his courage. He highlights how hard it is to be prepared for such unexpected loss, but “the main reason for doing this documentary was that I wanted to help myself open up, to help my children, help other people. What I’ve learned along the journey is that talking is so important …”

As for the future? By discussing Rebecca’s loss with other widowers and healthcare professionals he has found ways to cope. For example, using a memory jar to detail all the family’s memories of their mom and wife to help stimulate conversation. Ferdinand has thrown himself into his family, explaining that, “I’m undoubtedly a better dad because my kids are benefiting and I see that day in and out. Its testament to them that you couldn’t tell they have lost their mum in a room full of kids.” He’s also heavily involved with his foundation and restaurant. But perhaps he’s also achieved another goal—no soccer ball involved!—helping and inspiring others. As one Twitter fan stated: “In many ways, Rio will have more impact with this than any kick on a football field.”

This was backed up by fellow young dad and widower, Daniel Naylor, who spent time with Ferdinand in a bereavement group: “I don’t think he will ever know how much it has helped people who have been through the same thing for a number of years—trying to bring families back together … The program was only on last night and it has already started to help people.”

To watch his talk show appearance take a look below: