Are you serving Christ but making sure you’re not ‘extreme’ about it? This is your saint 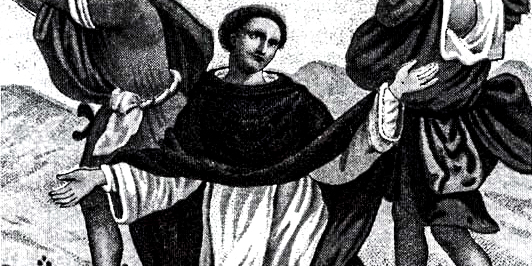 Be careful. God is never finished and he never gives up.

Everyone loves a good conversion story, a saint who was a mass murderer or a satanist before coming to Christ.

But for those of us who are years past our own conversion and still somehow plagued by habitual sin, there’s something even more comforting about the life of a saint who was converted but not fully, a mediocre monk or petulant daily communicant who somehow still found his way to sanctity.

Blessed Anthony Neyrot (c. 1425-1460) is a perfect example of a Christian who was no better than he ought to be.

Received into the Dominican order by St. Antoninus, he was ordained a priest. Early success at preaching had given him a big head, however, and the impatient and willful Fr. Anthony didn’t enjoy his first assignment in Florence, so he asked to be moved. St. Antoninus warned him of grave dangers to his soul if he persisted in demanding this change, but to no avail. Off Anthony went to Sicily but was unhappy there as well, so again he insisted on a transfer and found himself on a ship to Naples.

If he had continued in this vein, Anthony might well have found himself whining and demanding his way to damnation, but God in his mercy sent Moorish pirates to intercept the ship. It’s an odd thing to imagine pirates as instruments of salvation, but in God’s providence there’s nothing that can’t work for our good.

Unfortunately for Anthony, he didn’t need a quick spiritual healing. He needed a full-on resurrection, which meant he was going to have to fall farther than just arrogant friar. Being kidnapped and sold into slavery to Muslim captors wasn’t enough to break him of his pride. Despite being well-treated in the caliph’s household and allowed to move about Tunis with few restrictions, Anthony’s petulance and arrogance continued and eventually proved too much for his masters. They locked him up and allowed him only bread and water.

This, it seems, was too much for the supercilious young man. Though he wasn’t tortured, he was overcome by his situation and denied Christ in order to obtain his freedom. Immediately, he was set free, adopted by the caliph, and married to a Turkish noblewoman. His worldly comfort secured, Anthony was wholehearted in his apostasy. He lost his faith in Christ completely and even began translating the Quran into Latin in order to spread Islam to the west.

But much as Anthony studied the Quran, he struggled to see it as true. For four months he persisted, until word came of the death of his mentor, St. Antoninus. Anthony was disturbed to hear of this, but much more so that night when the good bishop appeared to him and called him to conversion.

Chastened, Anthony sent his wife back to her family and began the life of a penitent. He spent his days praying the Rosary, a humbled man begging the Lord for the courage to do what he must. But Anthony knew that a public apostate must be a public penitent, and in order to repair some of the damage he had done to the body of Christ, he arranged to announce his reversion to the world. Having confessed his sins, he begged the forgiveness of the Christian community on Palm Sunday, was dressed in his Dominican habit, and presented himself to the caliph during a public procession the ruler was holding.

There on the steps of the palace, Anthony proclaimed his faith in Jesus Christ as Lord and lamented his previous weakness in denying him. Stunned, the caliph tried to persuade him to continue in his apostasy, but Fr. Anthony only preached the name of Jesus more loudly. Before long, he was dragged off to prison and was stoned to death on Holy Thursday in 1460.

The life of Bl. Anthony Neyrot is a perfect illustration of St. Paul’s maxim: “where sin increased, grace overflowed all the more” (Rom 5:20). When he was a “faithful” priest, he had a hardened heart. It took great suffering and ultimately great sin for him to see his need for God’s mercy. Like many of us, Bl. Anthony had to hit rock bottom before he could allow God’s grace to work in his life.

Now, God’s ability to work through our sin doesn’t give us permission to succumb to temptation, as St. Paul reminds us a few verses later: “What then shall we say? Shall we persist in sin that grace may abound? Of course not!” But Bl. Anthony is a powerful witness to the fact that God is never finished, that he never gives up on even the most impossibly fallen of us.

On April 10, Bl. Anthony’s feast day, let’s ask his intercession for fallen-away Catholics, for reverts, and for those of us who live in the grace of Christ but not wholeheartedly. Bl. Anthony Neyrot, pray for us!