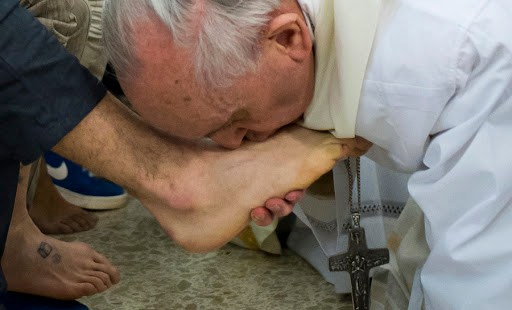 AFP PHOTO / OSSERVATORE ROMANO/HO
Pope Francis (R) kissing the feet of a young offender after washing them during a mass at the church of the Casal del Marmo youth prison on the outskirts of Rome as part of Holy Thursday. - es
Share
Print
Diane Montagna - published on 04/06/17

This year, the washing of the feet will include former members of the Mafia

VATICAN CITY — Pope Francis will celebrate the Mass of the Lord’s Supper, on Holy Thursday, at a prison for ex-Mafiosi in Paliano, Italy, the Holy See Press Office announced today.

During the celebration of the Mass of the Lord’s Supper, the pope will wash the feet of several prisoners. The visit is “strictly private,” the Holy See has said, and will not be broadcast.

According to the Italian Ministry of Justice, the prison houses 74 detainees. It is organized in three sections: one male; one female; and one that serves as a health facility — mainly for prisoners suffering from tuberculosis.

In addition to housing prisoners who are ill, the penitentiary is unique in that it holds what are called “collaborators of justice.” These prisoners are repentant, former mafia members, who have agreed to collaborate with the justice system. In exchange for their cooperation, their sentences are reduced substantially, and they are provided with security by the Italian state.

The municipality of Paliano, located in the province of Frosinone and the diocese of Palestrina, is about sixty kilometers (37 miles) southeast of Rome.

Since the beginning of his pontificate, Pope Francis has chosen to celebrate the Mass of the Lord’s Supper, on Holy Thursday, at a place marked by suffering.

In 2013, he went to a prison for minors where he included, for the first time, women and Muslims among the inmates whose feet he washed. The following year he travelled to a center for the sick and disabled, again including women among those who had their feet washed in memory of Jesus’ gesture of humility and service. And in 2015 he returned to a prison.

Last year, Pope Francis included Muslims, Hindus and Coptic Orthodox men and women in the rite of the washing of feet, at a refugee reception center located just north of Rome.