The best way to preach Christ in film? Tell a true story 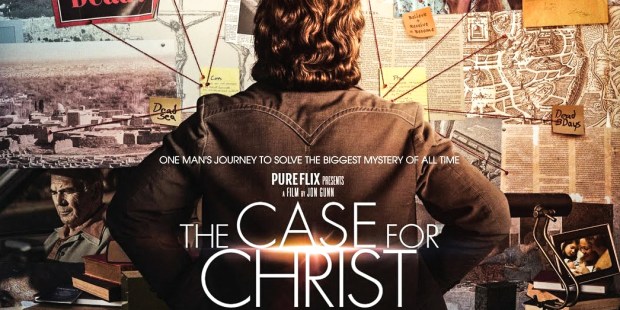 “The Case for Christ” points to a lesson learned by its producers.

Just in time for Easter, Pure Flix Entertainment is back with another motion picture designed to delight the faithful and disturb the skeptics. This has become something of a Holy Week ritual for Pure Flix, with 2014’s God’s Not Dead being their most notable Eastertime release. That fictional film came under heavy criticism from believers and non-believers alike for its one-sided portrayal of the conflict between a Christian college student and his irreligious professor. Perhaps aware of this, Pure Flix has decided to go the true story route this year with an adaptation of Lee Strobel’s best-selling autobiography, The Case for Christ, which follows the award winning investigative journalist’s reluctant journey into Christianity.

The story begins with Lee Strobel (Mike Vogel) well into a career at The Chicago Tribune where he serves as the newspaper’s legal affairs editor. Lee’s life at this point is pretty much where he wants it to be, with his star on the rise at work and a loving wife and daughter at home. Everything couldn’t be more perfect. And then his better half just has to go and blow it all up by finding Jesus.

An ardent atheist, Strobel wants nothing to do with the make-believe world his wife Leslie (Erika Christensen) has wondered into, especially considering they had previously agreed there would be no hint of religion in their household. Much to his chagrin, however, Leslie’s newfound faith is unshakeable, and Lee is soon at a loss as to what to do about it.

It’s at this point that Lee’s editor, who also happens to be a Christian, presents the reporter with an irresistible challenge. If Lee truly wants to pry his wife out of the arms of Jesus (he speaks of her conversion as an act of betrayal), then why not use his journalistic skills to prove her religion is false. The easiest way to doing so, the editor proposes, is to disprove the resurrection of Christ. Without that event, everything else in Christianity falls apart.

Lee throws himself into the task, pursuing every possible angle to explain away the resurrection. He interviews medical doctors to determine if Christ could have survived the crucifixion. He consults historians to question the reliability of the biblical texts. He meets with psychologists to discuss the possibility of mass delusion on the part of the apostles. None of the experts give him the answers he was expecting. It isn’t long before Lee’s frustrations over being unable to discredit Christ’s rising from the tomb begin to interfere with his work and harm his marriage.

Read more: Brian Bird talks 'The Case for Christ' and 'When Calls the Heart'

Considering that this is a Pure Flix production, and the fact that the real-life Strobel now works as a Protestant pastor and professional apologist, there aren’t too many surprises in the resolution of Lee’s investigations. What tension there is in the story revolves around whether or not the Strobels’ marriage can survive Lee’s growing hostility as his research leads him towards an undesired conclusion. To this end, Vogel and Christensen give believable performances as the struggling Strobels, with some able support from veterans such as Faye Dunaway, Robert Forster, and Frankie Faison.

The inclusion of such recognizable faces among the cast points out that Pure Flix is continuing to improve the quality of its productions. The Case for Christ demonstrates that the company is finally learning to make movies in order to tell stories rather than just function as vehicles for a sermon. Oh, the sermon’s still there, absolutely, but it’s more of an organic part of the story than in previous Pure Flix films.

Still, whether that’s enough to attract a secular audience remains to be seen. Up to this point, Pure Flix productions have remained fairly noxious to secular critics. Assuming any of them watch this one, it will be interesting to see how they react to The Case for Christ. As Strobel’s book was already something of a beginner’s guide to the subject matter, and the movie is more or less a CliffsNotes version of the book, the film is unlikely to be the final word on convincing anyone of the historicity of one of Christianity’s central tenets. More important than its apologetics, however, is that Strobel’s story illustrates how the use of one’s reason and intellect can lead a person into religion just as well as any emotional or supernatural experience. Given some of the popular attacks against the Church these days, that’s not an insignificant message to be putting out there.