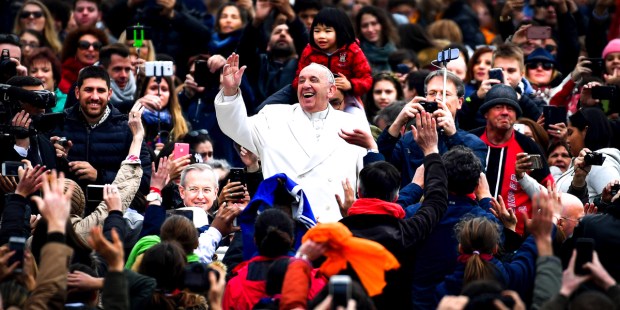 Here’s the pope’s schedule for the public liturgies of Holy Week, as released by the Vatican:

The pope will lead a procession for the blessing of the olive and palm branches in St Peter’s Square, starting at 10 a.m., and then celebrate the Mass of Our Lord’s Passion.

Palm Sunday also marks the 32nd World Youth Day with the theme taken from St Luke’s Gospel, “The Mighty One has done great things for me.”

Pope Francis will preside at the Chrism Mass with the blessing of the holy oils in St Peter’s Basilica, starting at 9:30 a.m.

He will celebrate a private Mass of the Lord’s Supper at a prison.

The pope will lead the celebration of Our Lord’s Passion in St Peter’s Basilica, beginning at 5 p.m.

That will be followed at 9:15 p.m. by the traditional Via Crucis, or Way of the Cross, at the Colosseum, after which the pope will greet the crowds and impart his Apostolic Blessing.

The Holy Father will celebrate the Easter Vigil in St Peter’s Basilica beginning at 8:30 p.m. with the blessing of the new fire and a procession with the Paschal candle. During the celebration he will administer the sacrament of Baptism before concelebrating Mass with cardinals and bishops.

Beginning at 10 a.m., Pope Francis will preside at the Mass of Our Lord’s Resurrection in St Peter’s Square before giving his ‘Urbi et Orbi’ blessing (to the city of Rome and to the world) from the central balcony of St Peter’s Basilica.