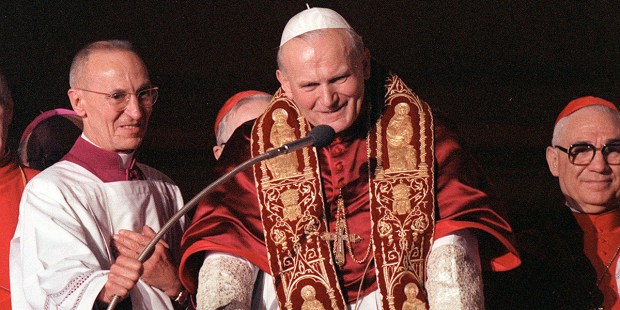 His first moments as Successor of Peter …

On the evening of October 16, 1978, the world watched as Pope John Paul II appeared for the first time on the loggia of St. Peter’s Basilica, to introduce himself to the Church.

Aleteia offers our readers this rare footage (with English subtitles) of Pope John Paul II’s first words after his election.

Remembering the election of JPII

At 6:18 p.m. local time, white smoke rose from the chimney of the Sistine Chapel, signaling that a new pope had been elected. The senior Cardinal Deacon, Pericle Felici delivered the traditional Latin announcement from the loggia of St. Peter’s Basilica, saying:

Which, translated into English, can be read:

I announce to you a great joy:
We have a Pope!
The Most Eminent and Most Reverend Lord,
Lord Karol, Cardinal of the Holy Roman Church Wojtyla
Who had taken the name John Paul

Pope John Paul II was the second-longest serving pope in history, after Pius IX, who served for nearly 32 years (from 1846 to 1878). He was also the first non-Italian pope in over four centuries (since the Dutch Adrian VI in 1522-1523). Yet, when he stepped out onto the loggia after his election, Pope John Paul II immediately won the hearts of the Italians, with just one word.

“I do not know if I will be able to explain myself well in your — in our — Italian language,” he told the Italians gathered in St. Peter’s Square. “If I make a mistake,” he said, “you will correct me!”

As this footage reveals, Pope John Paul II’s first words after his election express the core of his 26-year pontificate: the absolute centrality of the Person of Jesus Christ; total trust in the Blessed Virgin Mary; and the deep and true communion that binds Christians together and calls them to pour out their lives in loving service for God and neighbor.