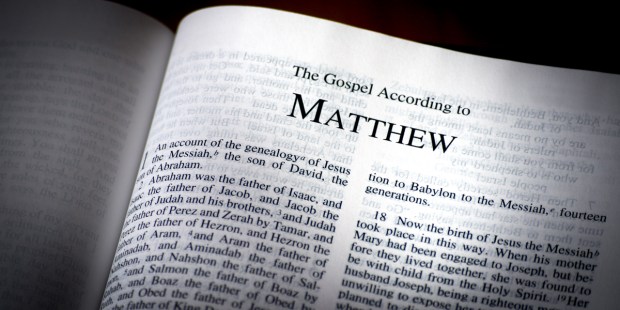 Hint: This poison is the opposite of love, art, and life.

The disciples went and did as Jesus had ordered them. They brought the ass and the colt and laid their cloaks over them, and he sat upon them. The very large crowd spread their cloaks on the road, while others cut branches from the trees and strewed them on the road.

The crowds preceding him and those following kept crying out and saying: “Hosanna to the Son of David; blessed is he who comes in the name of the Lord; hosanna in the highest.”

Indifference, a lack of concern or a refusal to act in the face of injustice, is at the heart of human suffering.

With this in mind, St Maximilian Kolbe (who was executed by the Nazis on August 14, 1941, after having offered his own life to save another condemned prisoner) described indifference as “the most deadly poison of our times.”

In most cases, our indifference flows from our desire for comfort or complacency and a sense that “I shouldn’t get involved” or “it isn’t my business.” Sadly, it’s easy to recognize how these attitudes allow injustice, abuse, and neglect to continue and increase in too many places in the world today.

However tempting it might be to pretend otherwise, there are things worth living for, suffering for, and even dying for.

This is why the question of Cuban poet José Marti—“When others are weeping blood, what right do I have to weep tears?”—calls us to an even more essential question: “What is the value of a life that is lived without anything worth dying for?”

God knows that these are tense and fear-filled days, and it’s easy to feel overwhelmed by everything we see on the news and social media. And yet, the inconvenience, discomfort, sadness, and pain we may feel if we open our hearts and pay attention to what is happening in and to the world around us are the only real antidote to indifference — because those feelings should call us to action.

Palm Sunday and Holy Week reveal for us a God who, in Jesus, was anything but indifferent: “He emptied himself, taking the form of a slave … he humbled himself, becoming obedient to the point of death, even death on a cross” (Philippians 2:7a, 8).

Although Palm Sunday’s ability to confront and confound our indifference can be startling and disconcerting, the real grace of this day is in the opportunity it provides for us to renew our commitment to life in Christ.

Each of the days of Holy Week challenges us to envision a life in which—rather than simply limping along from “mistake” to “mistake”—we take responsibility for our indifference, our self-preference, and our sins to become free to grow in love and our care about what we do to others, to creation, and to our own bodies, psyches, and souls.

In the end, living the mystery of the Cross leaves no room for indifference because, as St Cyril of Alexandria observed, “Christ’s example of courage in God’s service will be of great profit for us, for only by putting the love of God before our earthly life and being prepared when occasion demands to fight zealously for the truth, can we attain the supreme blessing of perfect union with God” (Commentary on John, 12.19).

How have you been indifferent toward the suffering others in the past? How do you see the indifference of society allowing evil to thrive in the world today?

How has your own experience of suffering been lessened by the care and concern of others?

How is the celebration of the liturgy this Sunday—and throughout Holy Week—inviting you to live with greater intentionality and mindfulness? How is God inviting you to do and be more?

Words of Wisdom: “[Palm Sunday] reminds us that at the moment of what seems to be the height of Jesus’ public acceptance also begins the process of His public betrayal, His public failure, His public abandonment. Only in the mind of God is Jesus any longer a success, it seems… On Palm Sunday, we are forced to remember the distance between apparent public success and personal commitment. Jesus stays the course to the end, we see, and so must we, despite all other pressures, both internal and social, to the contrary. Here in the Passion narrative, we trace the struggle, one scene at a time, between the Word of God and the ways of the world.” -Sister Joan Chittister, O.S.B., from The Liturgical Year: The Spiraling Adventure of the Spiritual Life