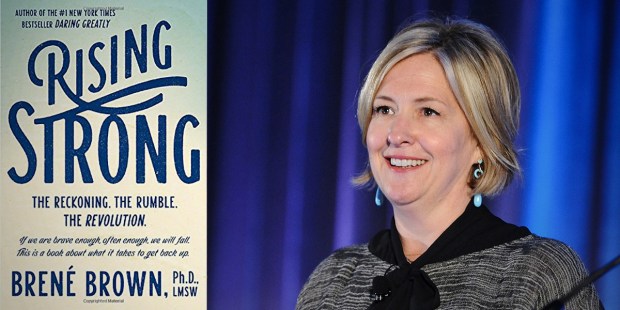 The new bestseller can teach you how to soar even higher after a bad fall.

Social researcher and bestselling author Brené Brown specializes in researching the least sexy parts of our lives—the parts we push down, deny, and generally prefer to avoid acknowledging or discussing. Shame. Vulnerability. Failure. But she also studies how facing the dark side of ourselves calls forth some of the most beautiful and valuable traits of a life well lived: courage, authenticity, wisdom, empathy, wholeheartedness, connection, love, and joy.

Brown’s most recent book, a #1 New York Times bestseller, is Rising Strong: The Reckoning. The Rumble. The Revolution. The upshot: Rising Strong is about helping us turn our moments of failure into pivots for personal growth, into engines of wisdom and wholeheartedness. Ultimately, it’s about growing wings even while you’re falling.

Brown says the core of the process is to “own our story,” which means accepting full responsibility for what transpired in our lives thus far. But with that ownership also comes liberation. It means that we realize that we own our story; it does not own us.

How? Brown breaks it down into three steps, each building upon the other.

Step one: The reckoning

In short, reckoning means recognizing your emotions for what they are, and then actively delving deeper. To go beneath the surface, Brown suggests exercising curiosity: ask how those emotions connect with the way you think and behave. Brown points out that most people tend to avoid recognizing their emotions, numbing the hurt with alcohol, food, drugs, sex, shopping, planning, perfectionism, the internet, and even staying so busy that they have no time to face how they feel. Others push down or stockpile their emotions to the point that they explode later on or even become physically ill. Or they accumulate all of life’s pains to such a degree that small triggers can cause disproportionate outbursts of anger.

“Pretending not to be hurt is choosing to become imprisoned by the dark emotion we have experienced—recognizing and feeling our way through the emotion is choosing freedom,” she writes.

As a practical means, Brown recommends mindfulness, letting ourselves fully experience the present moment without brooding over the past or imagining the future. It means recognizing our emotions without judgment, naming them, acknowledging them, accepting them.

This is where Brown recommends taking the reins of that ownership by writing your story down. Narrate it to yourself with honesty by understanding and accepting what happened without making up a myth or a fable to replace the truth.

One crucial distinction in this part of the process is learning to distinguish between shame and guilt. As Brown explained at length in her previous works, guilt has to do with our actions and behavior. But shame has to do with our very being, our existence. While guilt says “I screwed up,” shame says “I am a screw-up.” Guilt can be healthy and it is a fact of life because we all screw up sometimes. And guilt can be overcome by good actions. But shame is toxic. Shame is a lie that many people carry in secret, thinking that their very existence is worthless. The best antidote to shame, by the way, is to tell your secret to another person whose empathy can explode the lie and show you that you are not worthless.

What Brown calls “revolution” is the act of rising strong, of intentionally choosing authenticity, of turning the script around day by day.

“Revolution might sound a little dramatic,” she writes, “but in this world, choosing authenticity and worthiness is an absolute act of resistance. Choosing to live and love with our whole hearts is an act of defiance.” She adds, “Rising strong is the final piece of this transformation.”

This is not a get-successful-quick manual. Instead, it’s a guide for forging the interior victories that often precede the broader success of a life well lived, a life in which we own the story no matter what gets thrown at us. A life of agency, depth, and maturity.

Read more: Why solo travel is good for the soul

Brown writes, “You may not have signed up for a hero’s journey, but the second you fell down, got your butt kicked, suffered a disappointment, screwed up, or felt your heart break, it started. It doesn’t matter whether we are ready for an emotional adventure—hurt happens. And it happens to every single one of us. Without exception. The only decision we get to make is what role we’ll play in our own lives.”