Pope to scientists: Humanity needs you to warn us of where we could be headed 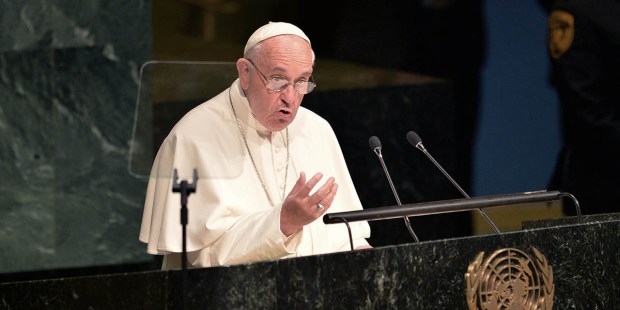 Pope Francis today reminded scientists of a weighty responsibility sitting on their shoulders: the need to “predict and prevent” negative consequences of the misuse of knowledge and skills.

The Pope was addressing members of the Italian National Committee for Biosafety, Biotechnology and Life Sciences at an audience in the Vatican.

The pope told them that their task is not just promoting the development of research but also to “predict and prevent the negative consequences that can result in a distorted use of knowledge and skills to manipulate life.”

Francis said that scientists and those in technology are “called to ‘know’ and ‘know how’ with increasing precision and creativity in his or her field of competence.” But, he said, that’s not enough.

They must at the same time “take responsible decisions on steps to be taken, and those before which it is necessary to stop and take a different road.”

“The principle of accountability is an essential cornerstone of human action, and man must answer for his own acts and omissions before himself, others and ultimately God.”

Pope Francis warned of the “enormous and growing power” put in the hands of humanity by technologies.

“The major risk,” he said, “is that citizens, and sometimes even those who represent them and govern them, do not fully realize the seriousness of the challenges that arise, the complexity of the problems to be solved, and the danger of misusing the power that sciences and the technologies of life put in our hands.”

He further warned of the problems resulting when money and technological power are in the same hands, saying that this leads to trends that profit a certain few, while working to the detriment of the poor.

The pope admitted that it’s not easy to harmonize so many competing interests, such as political interests with ethical, social and economic interests. To reach that harmony, he said, there must be “humility, courage and openness.”

But he said that the social conscience matures with the contribution of a “witness given by men of science to truth and the common good.”

The pope offered a final reminder about the right relationship of humanity and technology, saying science is at the service of humanity, and not the other way around:

[L]et me remind you that the sciences and technologies are made for man and for the world, not the man and the world for science and technology. They are at the service of a dignified and healthy life for all, now and in the future, and make our common home more liveable and supportive, more careful and guarded.