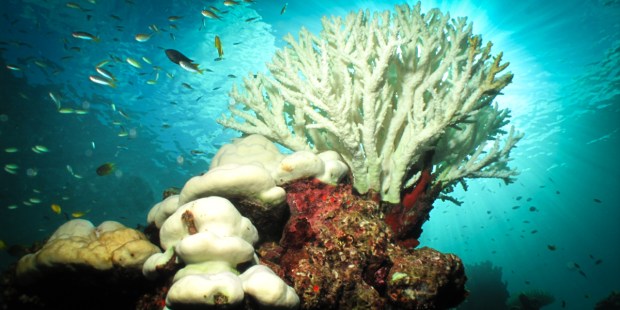 Days may be numbered for world’s largest coral reef system

Australia’s Great Barrier Reef has been called one of the seven wonders of the world. The world’s largest coral reef system is the largest single structure on earth made by living organisms. And it can be seen from outer space.

The large natural phenomenon has been in danger for a number of years, but now scientists are warning that that danger may be reaching a point of no return.

NBC News reports that two-thirds of Australia’s Great Barrier reef has been devastated by back-to-back years of severe coral bleaching from which it may not fully recover.

Aerial surveys have noticed the bleaching, which is not caused  by chemicals but is a natural process spurred on by higher temperatures.

And that, scientists say, may be due to global warming. Terry Hughes, director of the Australian Research Council’s Centre of Excellence for Coral Reef Studies, which carried out the studies of the bleaching, said it can be caused by weather patterns such as El Nino as well as higher temperatures driven by global warming.

What worries experts is the increasing frequency of the bleaching. The phenomenon has happened before, but this is the first time it’s occurred one year after another.

While the 2016 bleaching was part of a “global event associated with the 2015-2016 El Nino,” this year has more to do with a “very mild winter and [summer] heatwaves” on the east coast of Australia, Hughes said. …

Bleached corals can recover if the temperature drops and algae can recolonize. But experts warn this process can take up to 10 years.

James Kerry, who was part of the aerial survey team, said: “It takes at least a decade for a full recovery of even the fastest growing corals, so mass bleaching events 12 months apart offers zero prospect of recovery for reefs that were damaged in 2016.” …

But while Hughes said the reef was likely struggling with multiple problems, the most pressing was global warming.

“As temperatures continue to rise the corals will experience more and more of these events. One degree Celsius of warming so far has already caused four events in the past 19 years,” Hughes said. “Ultimately, we need to cut carbon emissions, and the window to do so is rapidly closing.”