Holy Week Around the World: The Via Crucis in Mexico City 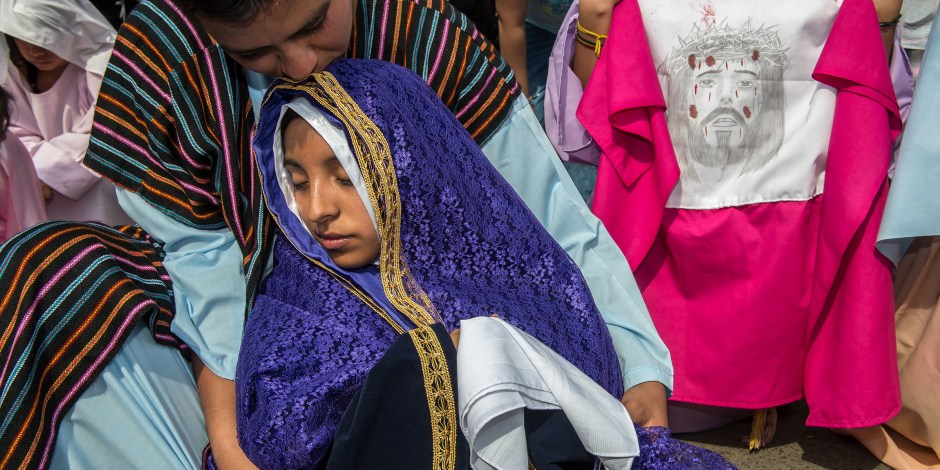 MEXICO CITY: Miriam Martinez, representing the Virgin Mary, participates with others in a neighborhood procession of the Via Crucis — the Way of the Cross, also called the Stations of the Cross —  as part of Holy Week celebrations. Near her is a young woman representing Veronica, traditionally remembered as the woman who, moved with pity for Jesus in his suffering, offered a cloth to his battered countenance, and was rewarded for her generosity of spirit with the image of the Holy Face.

The sixth Station of the Cross announces “Veronica wipes the face of Jesus…” While this scene within the Passion is not explicitly noted in scripture, it is a traditional belief of long standing — ancient tradition says she was the hemorrhagic woman whom Jesus healed for her faith, and some reference Isaiah 53:2 as being a kind of prophecy explaining the resulting icon: He grew up before him like a tender shoot, and like a root out of dry ground. He had no beauty or majesty to attract us to him, nothing in his appearance that we should desire him.

It has also been suggested that the story of Veronica ministering to the Holy Face of Jesus references the psalmist who, in Psalm 27:8-9, sang: You have said, “Seek my face.” My heart says to you, “Your face, Lord, do I seek.” Hide not your face from me. Turn not your servant away in anger, you who have been my help. Cast me not off, forsake me not, O God of my salvation.

While there are several cloths purporting to be “Veronica’s veil,” perhaps the most intriguing one, because it cannot be explained, is the relic known as the “Sacred Visage,” which is kept in a monastery church in Manoppello, Italy. In 2006, Pope Benedict XVI became the first pope to visit the icon:

Pope Benedict knelt in prayer before the relic also known as the Sacred Visage, which has been guarded by Capuchin friars in a remote monastery in Manoppello in the Apennine mountains for centuries.

But the Pope stopped short of endorsing the veil, venerated since the Middle Ages, as the true face of Christ.

“Together we seek to know the face of our Lord and in it find a path for our lives,” the German-born Pope told priests and pilgrims after viewing the relic, housed in a heavy frame adorned with gold and silver above the altar.

The fragile cloth depicts very clearly, in blood red hues, a bearded man bearing a striking resemblance to a more famous relic, the Turin Shroud in northern Italy, which is revered by some Christians as the cloth used to wrap Christ’s body.

Measuring 17 by 24 centimeters, legend says it was used by a woman called Veronica to wipe Jesus’s face as he bore his heavy cross through Jerusalem to his place of execution by the Romans on Golgotha, the Place of the Skull. The cloth is said to have healing properties and in medieval times it was considered miraculous that the visage of Christ is only visible from certain angles. Its origins are uncertain.

Photo by Omar Torres for AFP

Daily prayer
Aleteia's Top 10
See More
Advertising
Newsletter
Get Aleteia delivered to your inbox. Subscribe here.
Thank you! Your submission has been received!