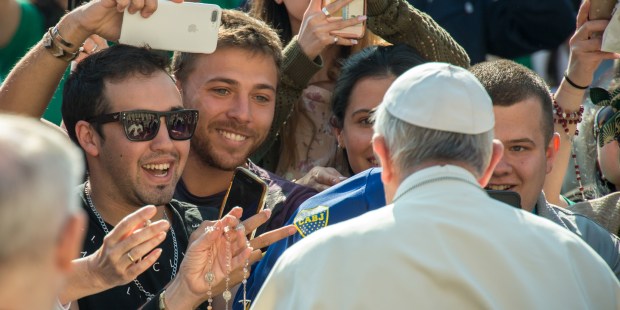 Enter the Easter Triduum as a school of love

VATICAN CITY — Pope Francis has given Christians a “homework” assignment for Holy Week, inviting them to contemplate the Cross as a school of love.

In this school, he said, we learn a “humble logic” in which “one who loves … loses power” and “one who is greedy … ends up losing everything” to his “nasty thirst.”

Speaking to an estimated 10,000 faithful and pilgrims at today’s general audience in St. Peter’s Square, the pope’s reflection is the latest in his series on Christian hope.

Worldly hopes crumble before the Cross

Reflecting on Jesus’ triumphant entry into Jerusalem, Pope Francis said that many people in the crowd placed great hope in him: Some expected miracles and great signs, while others were looking for demonstrations of power and even freedom from their enemies.

But who would have imagined that shortly thereafter, Jesus would be humiliated, scourged, and condemned to death on the Cross?

“Their worldly hopes crumbled before the Cross,” he said, and sometimes ours do to. But, he added, the Cross is also where true hope is born.

Hail O Cross, our only hope

Jesus’ words as he entered Jerusalem can help us understand the mystery of hope, Pope Francis said. “Unless a grain of wheat falls to the earth and dies, it remains alone; but if it dies, it bears much fruit” (Jn 12:24).

“Think of a grain of wheat or a tiny seed that falls to the ground,” he said. “If it remains closed in on itself nothing happens; whereas if it breaks open and gives life to a sprout, then to a blade, then to a plant, and then the plant yields fruit.”

Jesus brought a new hope into the world. Like the seed, he became tiny and “fell to the earth” through his Incarnation. But for divine love, “that was not enough.” In order to bear fruit, Jesus loved those who were his own “to the end,” allowing himself to be broken by death as the seed is broken underground.

“There, at the most extreme point of his self-abasement — which is also the summit of love — our hope sprang forth,” the pope explained.

Speaking off the cuff to the crowds, Pope Francis said: “Were one to ask me: ‘Where does hope come from?’ From the Cross! Look at the Cross. Look at Christ Crucified. That is the source of unfailing hope, the hope that endures to eternal life.”

“Jesus has transformed our sin into forgiveness, our death into resurrection, our fear into trust. That is why our hope comes from, and is always revived, on the Cross,” he said.

Do you want to be a winner?

“It can seem to be a losing logic,” he acknowledged, “because one who loves loses power. Have you thought about this? One who loves, who gives, loses power. He divests himself of something; to love is a gift. In reality, the logic of the seed that dies — of humble love — is the way of God, and only this bears fruit.”

“We can see this in ourselves,” he continued. “Possessing always drives us to want something else: I have obtained one thing for myself, and immediately I want something bigger, and so it goes, and I am never satisfied.”

“This is a nasty thirst,” he said. “The more you have, the more you want.”

But one who is greedy is never satisfied and ends up losing everything, Pope Francis said. On the other hand, “one who accepts, who is available and serves … is a winner. He saves himself and others; he becomes a seed of hope for the world.”

What we can learn from mothers

This way of loving necessarily involves the cross and sacrifice for us, the pope explained. But as Easter shows us, the Cross is the way and not the final end. The end, he said, is glory.

To illustrate this, he said, Jesus used a “beautiful” image with his disciples at the Last Supper. “When a woman is in travail she has sorrow, because her hour has come; but when she is delivered of the child, she no longer remembers the anguish, for joy that a child is born into the world” (John 16:21).

“Giving one’s life, not possessing it. This is what mothers do: they give another life; they suffer, but then they are filled with joy, happy because they have given birth to another life,” he said.

Love is an engine

As we enter into the Easter Triduum, he said, “let us allow ourselves to be enwrapped by the mystery of Jesus who, like a grain of wheat, in dying gave us life. He is the seed of our hope.”

Pope Francis concluded: “I would like to give you a homework assignment. It will do us all good to stop in front of the crucifix, to look at it, and to say to Jesus Crucified: ‘With you, nothing is lost. With you I can always hope. You are my hope.’”