To hell and back: Journeying with Jesus from death to life 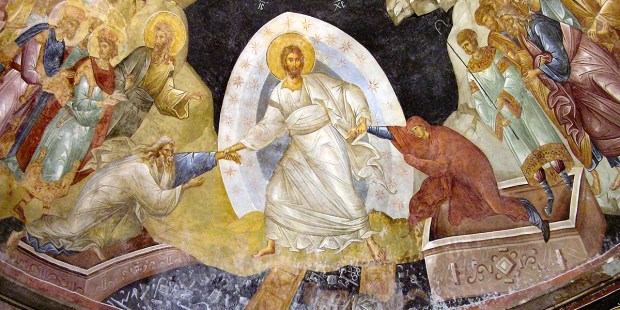 Holding on to hope in times of despair is an intentional choice.

Is a cemetery a good place to begin a meditation on Easter? Today, I found out. I spent the afternoon in a grand old cemetery, walking amidst monuments and markers that dated back centuries. The years and names spin through my memory now in a blur of stone.

Jews, Christians, Freemasons, firefighters, war veterans, patriarchs, infants, families, orphans—myriad combinations of the human condition were there, memorialized by simple plaques, poignant sculpture, grand tombs and tiny markers. There were acres of reminders of human lives that came to an apparent end.

In a cemetery, one thinks of the dead, of course, but this afternoon, I thought of those who buried the dead and then turned to face the rest of their lives, wondering how they would face the next day without the presence of those they buried. How many mourners left with hope or with despair?

I think of these things as Lent of 2017 draws to a close and Easter draws near. I know that last Sunday (Palm Sunday of the Lord’s Passion) Egyptian Christians were murdered in churches. Today I spoke to a dear man who just lost a friend of 40 years to cancer. How can we speak of hope or of home when we know that death comes for us all and that this world is passing away?

These are not new questions. From the beginning, man has suffered loss and death. Impermanence has driven man to desolation or to mania. Recall the last lines of the poem by Shelley:

“And on the pedestal, these words appear:
My name is Ozymandias, King of Kings;
Look on my Works, ye Mighty, and despair!
Nothing beside remains. Round the decay
Of that colossal Wreck, boundless and bare
The lone and level sands stretch far away.”

Just like the monuments I saw today, any work of human hand or will must succumb to the passage of time. Eventually, the memory of every person I walked past today will perish. In the presence of that dark and sobering fact, the Christian must speak.

Either Jesus Christ, true God and true man, took on the whole human condition, including death, and infused it with hope rooted in divine life and triumphant love—or Christians have nothing of lasting value to offer the world. Oh, we may be well-intentioned do-gooders who speak of love and work for justice, but in the end, we are just as feckless, pointless and hopeless as the most worldweary cynic or despairing atheist.  If Christ hasn’t won for us  victory over death, then whatever else we do or don’t do, say or don’t say, won’t and can’t matter in the end—because we’re all doomed to die and be forgotten.

The glorious boast of the Gospel is that Jesus Christ, God’s victorious shout of stubborn love, entered into time and space and flesh in order to search out and save sinners made in the divine image. Jesus Christ so fiercely loves the fallen children of his Father that he chose to enter our tombs to find us, even entering and plundering hell itself to retrieve us from our self-inflicted tragedy.

The Gospel of Christ crucified, risen, reigning and returning enables a walk through a cemetery to be an occasion of hope rather than despair. Christ wishes to share his victory over death with us, to sanctify us so that we might see the face of God and live, and to unite us with all the blessed who have gone before us in the communion of saints. Yes, for all mankind, there will be tears and tombs—and for Christ’s faithful, there will be triumph.

When I write next, I will speak of learning to live forgiven.  Until then, let’s keep each other in prayer.