Cause for beatification of Fr. Jacques Hamel, priest and martyr, is officially opened 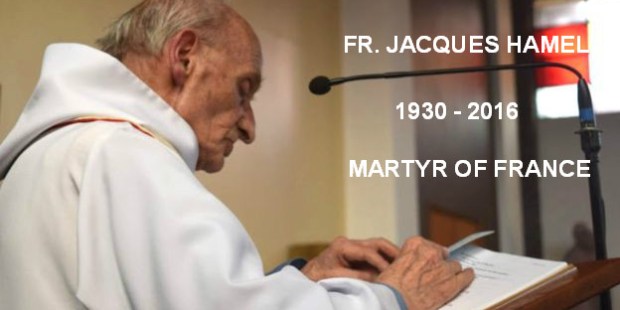 Holy Thursday specifically chosen for date, as it commemorates the Institution of the Eucharist, and honors all our priests

The cause for beatification of Father Jacques Hamel, who died as a martyr in Saint-Etienne-du-Rouvray in July 2016, officially opens today. A symbolic date, as on Holy Thursday when the Church commemorates the institution of the Eucharist and honors all its priests.

“Make him a saint!” The friendly injunction of Pope Francis to the Archbishop of Rouen, Monsignor Dominique Lebrun, was not left unanswered. “The Beatification of Father Jacques Hamel? If I did not think about it, I’d be deaf!” Archbishop Dominique Lebrun joked after a Pope’s Mass in the chapel of the Maison Sainte-Marthe, in homage to the priest who was assassinated last July. It is now done.

The diocesan inquiry, the first step in the process of beatification of Father Jacques Hamel, was launched on Thursday, April 13 by the Archbishop of Rouen at the end of the Chrism Mass, according to a statement from the diocese. The Holy Father had granted Lebrun six months ago a special dispensation from the canonical period of five years to be respected before the opening of the cause.

Pope Francis asked the priests on Thursday morning, during the Chrism Mass in St. Peter’s Basilica in the Vatican, to incarnate “evangelical joy” and to be like the “pierced Heart” of the gentle and humble Christ. There is no doubt in his mind that Father Hamel has given the most beautiful testimony to the “pierced Heart of Jesus, to the gentle, humble and poor integrity that attracts everyone to Him.” The Archbishop of Rouen quickly related that the Pope had asked for the picture of Father Jacques Hamel to be placed on the altar where he was preparing to celebrate Mass in September: “I was looking for the picture in my bag, And immediately the Pope said to his secretary: “Put it on the altar!”

“Father Hamel is a martyr!” The Holy Father hammered out during his homily, and his martyrdom, he insisted,” he accepted it as Christ at the altar, giving his life not to deny Jesus.” On September 15, 2016, Father Hamel’s breviary was symbolically deposited in the Church of St. Bartholomew in Rome. A church entrusted by Pope John Paul II to the Sant’Egidio community – which works tirelessly for peace in the world – and devoted to the new martyrs of the twentieth and twenty-first centuries.

Read more:
Among the Modern-Day Martyrs of San Bartolomeo

The process towards the beatification of Father Hamel will follow the usual process, starting from the diocese of Rouen. It is a process that will take several years, even if the procedure is simpler when it comes to a servant of God killed “in hatred of the faith,” as was the case of Father Hamel. The beatification of a martyr does not require a miracle because martyrdom is already testifying to a special help received from God.

The communiqué of the Diocese of Rouen states:

Father Paul Vigouroux, as postulator, is responsible for conducting the investigation which comprises two major phases: a diocesan inquiry and the examination of the cause in Rome. If it succeeds positively, the martyrdom of Father Jacques Hamel will then be officially recognized according to the criterion of the Catholic Church: to have suffered death for his faith in Jesus Christ.

The diocesan inquiry is therefore open. The faithful are called to testify spontaneously. In fact, many did not wait to write to the archbishop. About fifty people will be summoned. These are of course the direct witnesses of his death, but also those who have been closer to him: family, priests, parishioners, friends. The hearings are not public but are conducted in the presence of sworn officers. At the same time, the writings of Father Jacques Hamel will be examined by sworn theologians. They are essentially sermons and homilies as well as the editorials of the parish bulletin. A great work of classification has already begun with a competent team of archivists.

Read more:
Father Hamel died as he wished: working until his last breath