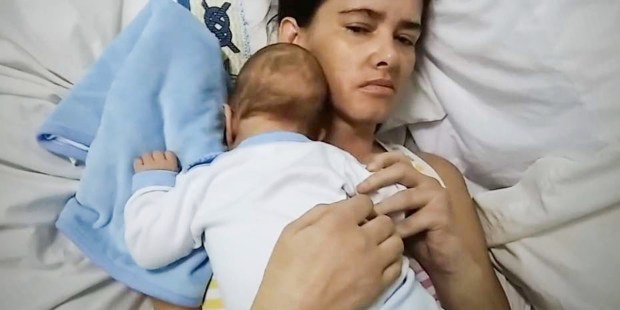 A pregnant woman’s faithful family rallies prayers and hope after a tragic accident.

After sitting by the bedside of a loved one in a coma, there are few things more joyous than witnessing their emergence from such a sad and uncertain state. For the Bannan family in Argentina, however, their dear Amelia’s responsiveness after a painful five months was even more remarkable because they were finally able to introduce her to her infant son, Santino.
Read more: Looking to volunteer? You can cuddle newborn babies

Amelia, a police officer in a city called Misiones in Argentina, was in a tragic car accident last November, according to Clarín news. Although with several friends, she was the only one who suffered severe injuries. To make matters, worse, at the time, Amelia was about five months pregnant. The accident sadly left her in a coma but amazingly, her baby survived and was able to remain in utero.

Amelia’s loving brother, César, kept friends and family updated on his sister’s condition via his Facebook page, asking for prayers and remaining inspirationally hopeful throughout the whole ordeal. “Please pray … for Amelia Bannan,” he wrote in a post following the accident. “Her life is in God’s hands.”

The following month, on Christmas Eve, Amelia’s beautiful son was born, his mother remaining comatose. “God is listening to our prayers,” César wrote in a Facebook post announcing the little boy’s birth. To everyone’s delight, although born at just 34 weeks gestation and weighing a little over four pounds, Santino Gabriel is a healthy baby.

Amelia’s family has taken care of him over the past several months, frequently bringing him back to the hospital for physical contact with his mother.

Then, last week, miraculously, the beloved police officer became responsive. “It transformed our hearts,” César wrote, going on to report that Amelia had begun responding to questions and was moving her body consistently. Although she gave no indication that she realized who little Santino was, she embraced him as best she could while the little boy bounced up and down on his mother.

“[It] completely changes our lives from now on,” César expressed, maintaining his beautifully hopeful spirit. Since then, Amelia has begun to identify her loved ones who continue to express enthusiastic gratitude for her recovery.

“Thanks first of all to God,” César wrote, going on to express his certainty that his sister’s progress is a miracle. “Thank you, South America, for your prayers.”

Amelia’s recovery is, of course, still in progress as she adjusts to her present life after being unconscious for over five months. Still, it’s touching to encounter the excitement and heartfelt gratitude of her family at each and every step forward that she takes. Perhaps more than anything, it’s her brother’s unwavering hopefulness and exuberant gratefulness to God throughout this trial that are so inspiring.