‘The Case for Christ’ and a stubbornly historical religion 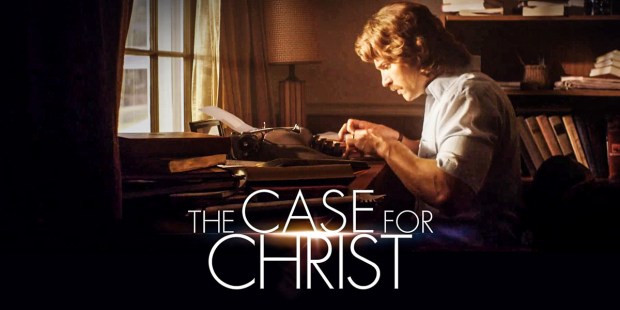 Bishop Robert Barron on the film’s portrayal of the psychological, spiritual, and intellectual dynamics of evangelization.

The Case for Christ is a film adaptation of Lee Strobel’s best-selling book of the same name, one that has made an enormous splash in Evangelical circles and beyond. It is the story of a young, ambitious (and atheist) reporter for the Chicago Tribune, who fell into a psychological and spiritual crisis when his wife became a Christian. The scenes involving Lee and his spouse, which play out over many months of their married life, struck me as poignant and believable—and I say this with some authority, having worked with a number of couples in a similar situation. In some cases, a non-believing spouse might look upon his partner’s faith as a harmless diversion, a bit like a hobby, but in other cases, the non-believer sees the dawning of faith in his beloved as something akin to a betrayal. This latter situation strongly obtained in the Strobel’s marriage.

In order to resolve the tension, Lee used his considerable analytical and investigative skills to debunk the faith that was so beguiling his wife. The focus of his inquiry was, at the suggestion of a Christian colleague at the Tribune, the resurrection of Jesus. If Jesus didn’t rise, his friend explained, Christianity crumbles like a house of cards. The narrative unfolds, then, as a kind of detective story, Strobel hunting down leads, interrogating experts, asking the hard questions.

I liked this for a couple of reasons. First, at its best, Christianity is not fideist, that is to say, reliant upon a pure and uncritical act of faith on the part of its adherents. Rather, it happily embraces reason and welcomes critical questions. Secondly, and relatedly, Christianity is a stubbornly historical religion. It is not a philosophy (though it can employ philosophical language), nor is it a spirituality (though a spirituality can be distilled from it); rather, it is a relationship to an historical figure about whom an extraordinary historical claim has been made, namely, that he rose bodily from the dead.

Now especially in recent years, many attempts have been made to mitigate the scandal of this assertion. Jesus was a great moral exemplar, a powerful teacher of spiritual truth, an inspiring man of God—and it doesn’t particularly matter whether the reports of resurrection are factually accurate. Indeed, it is probably best to read them as mythic or symbolic. To all of that, classical Christianity says no. It agrees with Lee Strobel’s colleague: if the resurrection didn’t happen, Christianity should be allowed to fall onto the ash heap of history. Therefore, watching our intrepid investigator go about his work is, for a true Christian, thrilling, precisely because the questions are legitimate and something is very really at stake.

So what were his inquiries? First, he wondered whether the resurrection stories were just fairy tales, pious inventions meant to take away our fear of death. But he learned that, in point of fact, many people claimed to have seen Jesus after his crucifixion, including five hundred at once. Moreover, most of the leaders of the early Church went to their deaths defending the legitimacy of what they taught. Would anyone do that for a myth or a legend of his own invention?

But another question came to his mind: might they all have been victims of a mass hallucination? A psychologist patiently explained that waking dreams are not shared by hundreds of people at different times and different places. “If hundreds of individuals had the same hallucination, that would be a greater miracle than the resurrection,” she informed him with a smile.

But what about the reliability of the Christian texts themselves? Weren’t they written long after the events described? A Catholic priest, who is also an archaeologist and specialist in ancient manuscripts, told him that the number of early copies of the Christian Gospels far surpasses that of any other ancient text, including the Iliad of Homer and the Dialogues of Plato.

What about the “swoon theory,” according to which Jesus did not really die on the cross but only lost consciousness, only to be revived sometime later? A Los Angeles based physician detailed for him the brutal process of a Roman execution, which resulted in the victim slowly bleeding to death and asphyxiating. The swoon theory, the doctor concluded, “is rubbish.”

At each stage of the process, Strobel continued to wonder, question, balk, and argue, all the time maintaining the default position that Christianity is bunk. Nevertheless, it was becoming clear that the relentlessness of the counter-arguments and their stubborn congruence with one another was wearing him down. This made me think of John Henry Newman’s famous account of how we come to religious assent. It is very rarely by virtue of one clinching argument, Newman said, but rather through the slow, steady confluence of inference, hunch, intuition, experience, the witness of others, etc. This convergence of probabilities, under the aegis of what Newman called the “illative sense” [understanding drawn by inference], customarily leads the mind to assent.

In the course of their conversation, Strobel’s priest-archaeologist interlocutor showed the skeptical journalist a reproduction of the Shroud of Turin, purported to be the burial cloth of Jesus. Gazing into the eyes of the image, Strobel asked, “What would have made him go through all of this?” The priest responded, “That’s easy: love.” As the arguments were jostling in his head, Strobel remembered that image and that explanation—and the filmmakers insinuate that this is what finally pushed him over into belief.

The Case for Christ is interesting for any number of reasons, but I think it is particularly compelling for its subtle portrayal of the psychological, spiritual, and intellectual dynamics of evangelization.