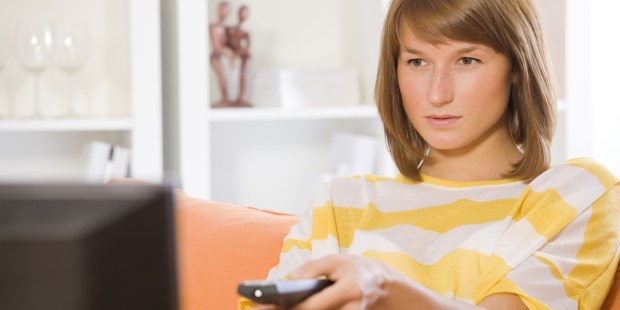 Movies can help us enter into the meaning of these sacred days.

Sometimes, we can lose sight of even our holiest days. Easter, the most sacred day on the Christian calendar, can be reduced by some to colored eggs and chocolate bunnies—a celebration of spring stripped of its ancient religious trappings. Even those of us who call ourselves Christian sometimes get carried away with our Easter bonnets and our ham-filled family feasts.

But if the culture sometimes lures us away from the true meaning of Good Friday and Easter Sunday, elements of that same culture — the movies we watch — can point us back. Here are five films that remind us (with varying degrees of impact) what this holy time is all about:

The Greatest Story Ever Told

This 1965, four-hour epic may be about the greatest story ever told. But the greatest movie about the greatest story? Hardly. In today’s jaded times, this film can feel like an ironic spoof of itself: Too pious, too clean, too holy for modern audiences. But for all its flaws, you have to marvel at it, too. It features a who’s who of the era’s biggest stars, including Charlton Heston as John the Baptist, Telly Savalas as Pontius Pilate and a host of dizzying cameos (including John Wayne as a Centurion). Most notably, it stars Max von Sydow, whom The Atlantic called “the greatest actor alive.” True to form, the actor does fine work here: Even though the film flopped at the box office, Sydow’s performance still arguably defined our screen image of Jesus for a generation.

We’re barely into our list and already I’m cheating. Jesus of Nazareth isn’t strictly a movie, but a 1977 British-Italian-made television miniseries that told the story of Christ over a mammoth six-plus hours. Like Greatest Story, Jesus of Nazareth can sometimes feel a bit too reverent for modern audiences. But also like Greatest Story, it features a top-shelf cast, including James Earl Jones as Balthazar, Christopher Plummer as Herod Antipas, Rod Steiger as Pontius Pilate and even the great Laurence Olivier as Nicodemus. And Robert Powell’s version of Christ, while quite English, is also undeniably riveting. Here he is, giving the Sermon on the Mount.

Released just last year, Risen is a detective story with the Roman tribune Clavius (Joseph Fiennes) serving as the tale’s ancient gumshoe. He’s been tasked with investigating the case of a mysterious disappearing body — that of Jesus of Nazareth. Clavius assumes, naturally, that the corpse was simply stolen, but as he investigates further, the Roman soldier realizes that the truth may be more profound than he could possibly imagine. This movie is one of the better Christian films we’ve seen, and Cliff Curtis’ portrayal of Yeshua is a thing of subtle beauty. In contrast to the very white, Euro-American Jesuses we’ve seen thus far in this list, this Jesus looks like he could be a Jewish carpenter from the Middle East. And when we first see him on screen, he’s easy to miss (reflecting Isaiah 53:2). But the more we see him on screen, the more we like him — filled with life and laughter and goodwill. This is a Jesus who feels real.

The Passion of the Christ

For many, I’m sure, director Mel Gibson’s bloody, profound depiction of Jesus’ last 24 hours is the standard by which all others are judged. This controversial 2004 film focuses on Jesus’ last painful hours before he died, depicting his tribulations in truly horrific detail. But Jim Caviezel’s Christ doesn’t just die movingly and believably, but he lives well, too — giving us (through a variety of welcome flashback scenes) moments of his justice, compassion, power, and even (as we see in the following clip) humor.

We’ve come full circle in our list. Made just six years before The Greatest Story Ever Told, the 1959 version of Ben-Hur is an epic, too, in every sense of the word. But this award-winning classic starring Charlton Heston has aged well — so much so that it’s my daughter’s favorite movie. Judah Ben-Hur is the story’s protagonist, of course, a member of Judean royalty unfairly sentenced to a (presumably short) life as a galley slave and who, through the mysterious hand of fate, experiences a strange reversal of fortune. But while Jesus isn’t the film’s star, He’s absolutely central to it. (Indeed, the book on which the film was based is called Ben-Hur: A Tale of the Christ.) And unlike the other films we’ve talked about, we never really “see” Jesus at all here. His face is always obscured. But we see His hands, His Face, His Kindness, His sacrifice. And most poignantly, we see how people react to him. Take a look at this scene when Judah Ben-Hur is being marched to the galleys — and how a short interaction with the King of Kings impacts him.

There you have it: Five films that depict Jesus in very different but poignant and powerful ways. And maybe there’s a certain beauty in those differences themselves. After all, Jesus came to save each one of us, right? We’re all so different that we may each gravitate toward different aspects of His character. And yet we all find salvation in that same blood.