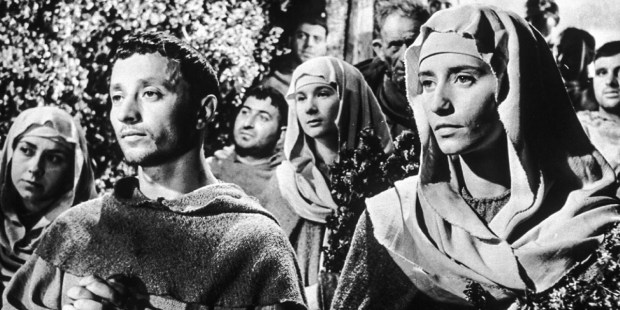 Yes, they’re in black and white, but that kind of suits the day, anyway.

If you’re looking for a great movie to watch before or during Easter – one that’s relevant and inspiring without all the extra cheese – there are fortunately some great options for free on YouTube, especially for those with a taste for black and white classics.

Four of these five respected films focus on men and women of incredible faith: Francis of Assisi, Franz Jägerstätter, Bernadette Soubirous, and Joan of Arc. Each story draws us into the suffering and humiliation of various trials – both literal and figurative – but also into the deep sense of joy and peace that each of these figures experienced. The fifth film draws us back into the roots of this paradox, and the model for these four models of virtue – a lesser-known but essential depiction of the life, death, and resurrection of Jesus Christ.

G.K. Chesterton wrote that St. Francis mirrored Christ just as the moon mirrors the sun – smaller, closer, and more visible. Chesterton gave us maybe the best account of the beloved Italian saint, whose name and sensibilities Jorge Bergoglio adopted when he was elected Pope in 2013. But for film buffs, there is Roberto Rossellini’s The Flowers of St. Francis, which beautifully captures the origins of Franciscan poverty, humility, and love for God.

This obscure German film tells the story of Franz Jägerstätter, an Austrian farmer who was executed by the Nazis in 1943 for refusing the serve in the German military. Through a blend of interviews and reenactments, we learn how and why a simple family man refused to let political or social pressures steamroll his conscience. Jägerstätter, who was beatified by the Catholic Church in 2007, will once again have his story told in Radegund, an upcoming film directed by Terrence Malick.

If ever there were an ideal casting, it would be that of Jennifer Jones as St. Bernadette Soubirous, a poor (and poorly educated) peasant girl who reports seeing a mysterious and beautiful “lady” near a garbage dump in Lourdes, France. Jones radiates a purity, simplicity, and honesty that resists any and all attempts to disregard or deconstruct her visions – and there are many. As various authorities and doctors try to find evidence that Bernadette is manipulative or deranged, a fascinating exploration of the relationship between faith and evidence unfolds.

This silent French film is widely considered a masterpiece of cinema. Carl Theodor Dreyer’s direction feels ahead of its time, filled with unsettling close-ups of an ecclesiastical court cross-examining another young French woman about her faith and its political implications. But what really makes the film is Renée Maria Falconetti, who fills the screen with looks of anguish and fortitude. The soundtrack in this version, provided by the Chicago band Joan of Arc, adds a layer of freneticism to the experience – but a click of the mute button will bring you right back to the original format.

Aside from a few truly great depictions – e.g., Franco Zeffirelli’s Jesus of Nazareth or Mel Gibson’s The Passion of the Christ – most films about Christ tend to be exercises in soft focus sentimentality, wherein a delicate, nebulous figure with ridiculous hair marches around making stilted pronouncements. Not so Pier Paolo Pasolini’s The Gospel According to St. Matthew. Pasolini – an atheist – gives us an eclectic soundtrack over a raw, unfiltered portrayal that growls more than it purrs. The central character’s strangeness is underscored by a startling unibrow and the serious, urgent countenance of a revolutionary sent to turn the world right-side up. But Pasolini doesn’t empty the Gospel of its spiritual meaning or twist it into a Marxist parable. Instead, he closely adheres to the source text – and the result uniquely brings the power and glory of the Gospel to life.