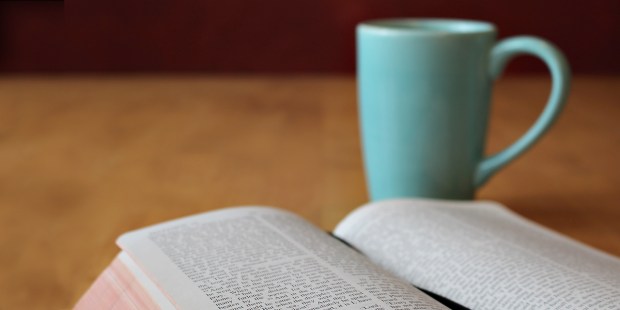 I want to grow spiritually, but often find myself too caught up in my day to-day habits.

On October 8 this past year, Pope Francis said something that stuck with me: “The Church is like Mary,” he said. “It is not a store, and it is not a humanitarian or non-governmental agency. It is sent to bring Christ and His Gospel to all.”

I can imagine the seriousness in his face as he said these words, and when I think of them, I nod along. Because, personally, I’m 150 percent on board with that idea: Mary inspires me, and I’ve always hoped to be more like her. And I think you should be, too.

The pope said that we should imitate the Mother of God in faith, in love and in being one with Jesus. And I agree with that. But I’ll admit that initially, reading his sermon, I felt a little like I’d fallen short of the task at hand. Am I,  have I ever been, or could I ever be truly like Mary? Even that third option — to work toward Mary-like qualities in the future — assumes a certain optimism that I wasn’t sure I had. Because faith and love I can do, but being one with God is still my Godot (from Samuel Beckett’s play, Waiting for Godot, in which two characters wait for the arrival of a person who never appears). I keep waiting and waiting. Instead of doing something.

The thing is, I really do want to be one with God. So eventually, I had to ask myself some tough questions about my faith and Mary-aspirations: Why, despite the desire to be with God, do I still put everyday responsibilities, wants and needs first, instead of a meeting with Jesus through prayer? Why don’t I wake up and fall asleep thinking of Him? Why is it so difficult for me to focus on prayer and make room for it in my day? How is it possible to want something so much and at the same time avoid it?

Desire means to really want something deeply. In the same way that I wake up with the strong desire for good coffee. I really want a new computer to make my day to day life go smoother and, what’s more, I want a free day all to myself. But I also want God to be a bigger presence in my life.

But you know what? We need to fight for everything on that list I just made. I need to consume good coffee so I can work harder and earn money to buy that new computer so I can work even more efficiently and make more money so that I can take the time to organize a day off (or maybe — dare I dream it — a vacation!) and, of course, more of that coffee. But where does God fit in? How do I organize my life around Him?

Read more: 10 U.S. cities that can mentally transport you to Europe

And then I realized: God gives himself to me on a silver platter. The Bible is on a shelf by my bed; the rosary is in the nightstand drawer. All I need is to take a few minutes in the morning and at night. Sometimes I do, but sometimes I convince myself it can wait.

In general, I pray, I go to church; I talk with smart people, and I read wise books. But I often feel that I am circling God instead of throwing my arms around His neck.

Recently a friend sent me a movie with fragments of Bill Hybels’ teachings. Bill Hybels is the author of a book I love called Simplify: Ten Practices to Unclutter Your Soul. In the film, Hybels talks about a man who at a certain point of his life began each day by sitting in a rocking chair with the Bible, concentrating only on God and His Word. It changed his life completely, but it wouldn’t have happened had he not made a decision to change himself and his routine first.

A simple truth helped him. Once, when Hybels was frustrated by his lack of time for prayer a man gave him some advice: “I always find time for things that are important to me. That’s how I function,” he said. At first, Hybels was irritated, but he worked through his own reluctance and laziness, analyzed the hierarchy of his values, bought a rocking chair and started giving God a half hour every morning.

Maintaining a relationship with God is a little bit like a marriage. The endorphin rush of the honeymoon period will disappear quickly, and even the loftiest ideas will drown in mud if we don’t work on them through little daily gestures of love and appreciation. It’s a pity to stop halfway, especially when the other person wants to selflessly share everything with us, for better or for worse.

Mary teaches us many things in this respect: her devotion to God was one and the same with her devotion to her family. She balanced trust, courage, love and selflessness. When I am feeling lost, or pressed for time, I like to think of something simple that Mary herself would say, like: “Jesus, I will hold on to you, no matter what.”

Jean-Paul Sartre did not believe in God, but in one of his books he wrote a stunningly universal thought: “We must, however, make a choice: to live or to tell.” Along with Mary, I always remember this quote when I find myself thinking or talking about my faith rather than really living it. Fortunately, it is never too late to make the decision to consciously live the truth.