Why is there a skull beneath my crucifix? 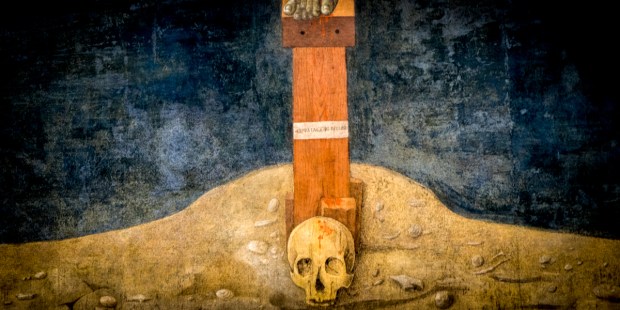 An ancient tradition links Golgotha to the very beginnings of sin.

It is known by many names – Golgotha, Calvary, the Place of the Skull.

Regardless of what one calls it, the importance of the location of Christ’s Passion remains indescribable to His followers. To spend some time in prayer at the site where the cross of Christ was erected and our Savior expired is, for many pilgrims, a surreal and life-changing experience.

There is, however, an additional significance to the site of Christ’s Passion, alluded to in the name “the Place of the Skull.”

Down below the Rock of Calvary is hewn another chapel, this one dedicated not to Christ and His Passion, but to the first man, Adam. This “Chapel of Adam” is held by tradition to be the final earthly resting spot of our first father.

Thus, Golgotha is called the Place of the Skull not only for its bone-white hue, but also for its location as the reliquary for Adam himself. Tradition further elaborates that, at the time of Christ’s Passion, the blood from His wounds seeped down, covering the remains of Adam.

The symbolism of the joining of the remains of fallen man and the blood of the Savior is not difficult to see – it reminds us that it is through Christ’s blood that we are coated with new life. Furthermore, this tradition serves as a beautiful illustration of Christ as the new Adam. The covering of the skull, a bodily image of fallen man, with the sacrificial blood of the Lamb generates a new image, one which recalls St. Paul’s words: “Just as we have borne the image of the earthly one, we shall also bear the image of the heavenly one.” (1 Cor 15:49).

In other words, at the time of the Passion, Christ lends His Sacred Image to fallen man, cascading it over the faithful through His sacrificial blood.

It is because Golgotha is considered the burial place of the first man that depictions of the death of the Son of Man often include a skull at the foot of the cross.

This is the skull of Adam, and offers to those of us unable to make pilgrimage to the Holy Land some small share in the Chapel of Adam. In contemplating the significance of this icon, we remember the great loss brought about by Adam, and the greater victory brought by Christ at that Place of the Skull, the transforming of Adam’s weakness into the “happy fault.”

We make of our prayer and veneration a type of mental pilgrimage to the Chapel of Adam, not as it is known in reality, but as it is depicted at the foot of the Cross.