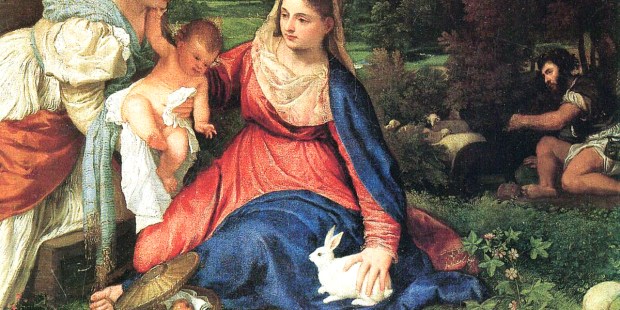 Like the eggs he brings, this treat-bearing rabbit has symbolic value.

While you certainly won’t find the Easter Bunny in the Bible, this symbol is not actually foreign to Christianity. In fact, the rabbit has been a part of Christian tradition and a symbol of the spring season for centuries.

As rabbits are prolific breeders, especially in the spring when winter hibernation is over, they’ve naturally long been associated with both new life and springtime. Rabbits usually give birth to a big litter of babies (called kittens) — up to 14 at a time!

There seems to be more than one trail of the origins of the Easter Bunny in Christian history, and possibly a combination of these traditions brought us today’s rabbit.

Early pagans saw the rabbit as a symbol of fertility because of their fast reproduction. When early Christian missionaries were evangelizing pagan cultures, they would take harmless pagan customs and combine them with the Christian meaning of the promise of new life in introducing them to Christ.

The ancient Greeks saw rabbits as a sign of spring, and even believed they could reproduce asexually. Some documentation from medieval times shows the rabbit being associated with the Virgin Mary and her pregnancy even though she “did not know man.”

In the middle ages, rabbits began appearing in illuminated manuscripts and paintings where the Virgin Mary was depicted, as an allegorical illustration of her virginity.

In early folklore, the Easter Bunny came as a judge, hiding decorated eggs for well-behaved children, much as Santa Claus brings presents to good little children.

It seems the Easter Bunny was first popularized as a symbol of the season by the German Protestants. They brought with them their tradition of an egg-laying hare called Osterhase or Oschter Haws. When they settled in Pennsylvania in the 1700s, their children would create nests so the Easter bunny would “have a place to lay its eggs.” Eventually, some say, the nests evolved into baskets and gifts and candy were placed in them. (That’s why we still line Easter baskets with colorful “grass.”)

Some German Protestants say the Easter Bunny brought colored eggs to good children and placed them in their hats or bonnets, and from that, the Easter basket developed.

Records of edible Easter bunnies, made of pastry and sugar, date back to southern Germany in the early 1800s.

Today around the world the Easter Bunny is part of Easter celebrations, hiding and distributing colored and chocolate eggs for children and leaving baskets of treats at their homes.