Were you there when the stone was rolled away? An account from the guards 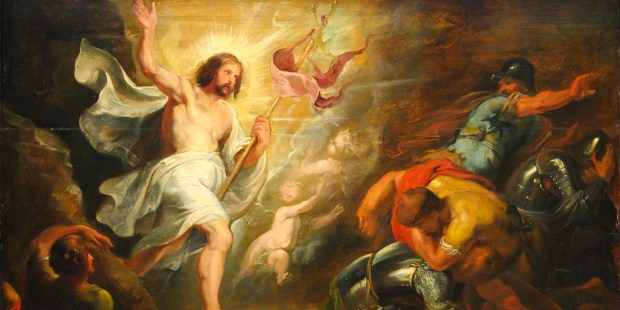 He was not afraid. Of course he was not.

Only, he could not seem to open his eyes.

The air was soft, light on his skin. In the sun’s warmth it should have felt as soothing as a woman’s caress, and yet …how is it the small hairs on his arms, on his hands and the back of his neck were raised like quills?

By Jupiter, he thought, what has occurred?

He had seen women approaching, and there had been a light, and a roar — such a white, dazzling light, full and lively; it seemed to fizz and sparkle, like the waters near Vesuvius, and then had come a sound: a sharp crack! followed by a rumble, and a humming tidal wave of sound.

A seizure of some sort, he thought. I have heard of fits that come after a vision of light.

He sighed hugely and moved his bulk, until he was on his back, one arm slung over his still-closed eyes.

It comes from too much work, one overfull day after another. I am unwell, made sick by this forsaken pisshole of a land and the feckless, capricious peasants that crowd every space and drain us with their demands. Only but a course of days it took, to sway them from a parade of palms and praise into a stinking, bloodthirsty mob, and then who must stride among them to keep them from destroying the peace, and themselves? Marcellus, of course. Underpaid, hard-pressed Marcellus Secundus Valerius, that’s who.

Groaning, he sat up, rubbing his face, and then spitting to clear his mouth. Looking up, he froze, feeling his skin prickle once more. The tomb was open.

Am I yet asleep, and dreaming, then?

His soldier’s instincts propelled him to his feet before he knew what he was doing. He scanned the area. The were no women; there was no one about, but Titus, the young, oafish brute assigned to him, sitting upright and gazing at him expectantly.

“What are you looking at, fool?” he demanded.

“When are you not in slumber, even awake? Come with me, now.”

Approaching the open tomb, Marcellus realized he was holding his breath. He looked down, at the dirt. The small, narrow footprints of women, but they were only faintly distinct — light, but not smeared. Nothing on the ground indicated large men, feet dug in; nothing suggested a leverage of weight. And yet the stone had been moved.

Women could not do this.

Titus, all brainless curiosity on legs, had not paused to look at footprints. Bracing himself at the edges of the tomb, he stuck his head in, and then quickly turned. “There’s just rags inside,” he called. “There’s nothing — no hair, no bones. He couldn’t have been eaten.”

Marcellus swore under his breath and shook his head, not for the first time wondering what action of his had so offended the gods as to saddle him with a porcine intellectual infant. Pushing Titus aside, he thrust himself into the small space.

Not rags, but the cloths of binding. The air was neither stale nor foul, but rather crisp; a lingering scent of lightening. As though a great storm had just passed.

“Someone must have taken him,” said Titus, making a face. “Pretty messy work.”

Marcellus, his brow furrowed, pushed past him. “Let us make our report.”

He was silent as they walked, trying to puzzle out what he had seen, and ignoring Titus whose unfocused mind had already moved on from the mysteries of an empty tomb, and whose never-idle tongue was babbling nonsense about the origins of pebbles and how they came to be.

But what shall I report? There was nothing I did not see! I saw the mockery of the jeering crowd; I saw his wrecked, ripped body straining under wood as I held them back. I saw… no. That was imagination … blood on a napkin, not a face, not an image, just blood. Saturating.

I saw him die! I watched him be laid into his weeping mother’s arms. She kissed that battered face, the dimmed eyes and cracked lips. She clutched him to her heart, with such tenderness as I cannot say, as though he were still her babe.

And she moaned. That gasp of a moan, so soft but wrung from a cave of such depths, and not meant to be shared.

He had never heard a sorrow so simple, so intense, so intimate. It had seemed so resolutely private, even as the curious and the grieving were teeming ’round.

Simply haunting, that mother, and the way she surveyed his wounds, all unflinchingly. And that soft, surrendered moan.

What shall I say? He was dead. He is gone. There were women. Were they magicians? There was whiteness of light. There was … a haze of a man. Was he in the light? Taken up from the earth by the gods? The gods can do as they like, of course, but … why would they raise up a simple, unimportant Jew into their strata?

I saw him die! I was pulled from my meal to stand a guard against … against the rumors come from the mouths of weak, cowardly Jews.

There were only women. And there was light, and a crack of thunder. I shall report what I have seen, Marcellus thought, and that is all.

“Do you think we’ll be punished?” asked Titus, whose inner circuitry had apparently completed a cycle. “We fell asleep, and they took him away. They will be angry to hear that we have failed, won’t they?”

Marcellus looked at him and for the first time his features relaxed. To Titus, he sounded almost amused in his response. “I will say only what I saw,” he answered, “and face the consequences. And you, my improbable second –” he threw something like a playful arm around Titus’ neck. “You must do the very same thing; you must share your thoughts, such as they are.”

He looked ahead. “You may be surprised at how happy you make them. Perhaps Titus will become an improbable first, yes?” His eyes suddenly lit with and unfamiliar humor. “And Marcellus Secundus? Perhaps he needs his furlough. His own freedom, at last.”

Freedom to wonder, he thought with some surprise. And then, perhaps, I will know.