Iraqi Christians have an Easter meeting with the “Risen Shepherd” 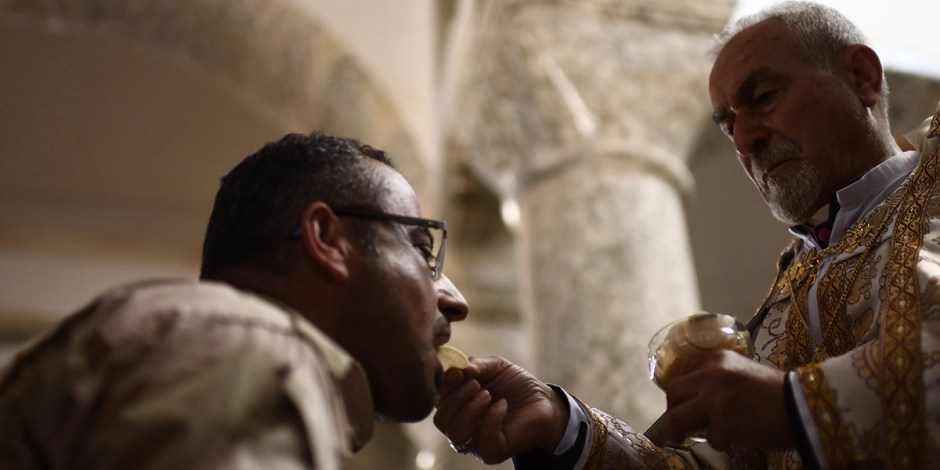 EASTER AROUND THE WORLD – Iraq

An Iraqi Christian priest gives the Eucharist during an Easter Mass at the Saint John’s church (Mar Yohanna) in the nearly deserted predominantly Christian Iraqi town of Qaraqosh (also known as Hamdaniya), some 30 kilometres from Mosul, on April 16, 2017. Qaraqosh was retaken by Iraqi forces late in 2016 as part of a massive offensive to wrest back possession from the Islamic State.

In his Easter message to the world Pope Francis said of Christ, the Risen Shepherd:

The Risen Shepherd walks beside all those forced to leave their homelands as a result of armed conflicts, terrorist attacks, famine and oppressive regimes. Everywhere he helps these forced migrants to encounter brothers and sisters, with whom they can share bread and hope on their journey.

In the complex and often dramatic situations of today’s world, may the Risen Lord guide the steps of all those who work for justice and peace. May he grant the leaders of nations the courage they need to prevent the spread of conflicts and to put a halt to the arms trade.

Especially in these days, may he sustain the efforts of all those actively engaged in bringing comfort and relief to the civil population in Syria — the beloved and martyred Syria — prey to a war that continues to sow horror and death. Yesterday saw the most recent vile attack against refugees who were fleeing, which left many dead and wounded. May he grant peace to the entire Middle East, beginning with the Holy Land, as well as in Iraq and Yemen.

Dear brothers and sisters, this year Christians of every confession celebrate Easter together. With one voice, in every part of the world, we proclaim the great message: “The Lord is truly risen, as he said!” May Jesus, who vanquished the darkness of sin and death, grant peace to our days.

Photo by Christophe Simon for AFP

Tags:
EasterPhoto of the Day
Daily prayer
Aleteia's Top 10
See More
Advertising
Newsletter
Get Aleteia delivered to your inbox. Subscribe here.
Thank you! Your submission has been received!