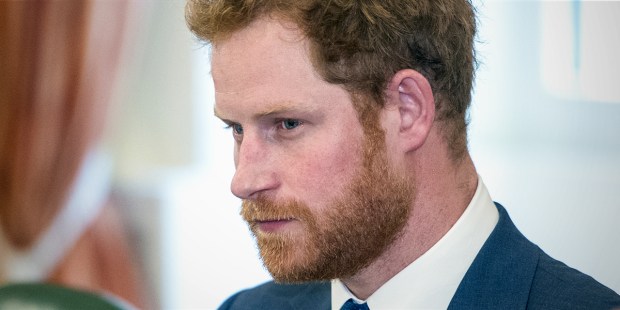 In promoting mental wellness, the royal admitted that ‘sticking his head in the sand’ only made his suffering worse.

At certain times in life our feelings and emotions may spiral out of control due to a specific trigger or a build up of events. While we might not be able to put a finger on why we may be feeling a certain way, there are those in our close circle who may be able to guide us, whether through conversation, their own experiences, or by pointing us in the direction of a professional who can help.

So when high profile personalities step up and announce that they have been in a vulnerable place and have needed that help we have to admire their bravery. On Easter Sunday, The Telegraph’s Bryony Gordon talked of her exclusive interview with 32-year-old Prince Harry for a series of podcasts she’s recording for Mad World, where well-known figures talk of their own emotional battles in an attempt to break down the stigma so often associated with mental health. And who better to kick off the series than a global figure who so publicly suffered the loss of his mom at such a tender age?

Read more:
The Mental Wellness Loft: A modern way to show compassion to the mentally ill

However, revealing to the whole world his own private struggle with his mother’s death that saw him “very close to a complete breakdown on numerous occasions” was no easy task for the prince. Pre-interview, he reported being “a little nervous, a little tight in the chest,” which is totally understandable as no one likes admitting their inner demons. Yet Prince Harry hopes that by opening up about his own experience, he will encourage others to seek help.

The prince speaks of how it was only at age 28 that he decided to properly address the loss of his beloved mother. On the outside, he had always appeared the dashing prince who turned up to royal events, smiled for the paparazzi, and partied (often wildly) like many others his age. Yet inside he was imploding.

Prince Harry candidly tells of how “shutting down all of my emotions for the last 20 years, has had a quite serious effect on not only my personal life but my work as well.” Seemingly well-balanced after his two tours in Afghanistan as a soldier in the Army air Corps, he felt he was always on the “verge of punching someone,” and he suffered from anxiety during royal engagements.

Read more:
Princess Diana’s great-great-great-uncle may be on road to sainthood

The royal denies his two tours were the cause of his mental health issues, believing that it was ignoring his need to grieve properly that resulted in this tailspin: “My way of dealing with it [Diana’s death] was sticking my head in the sand, refusing to ever think about my mum, because why would that help?” — leading to “two years of total chaos” in his life. He says that “I just couldn’t put my finger on it,” adding “I just didn’t know what was wrong with me.” And this is so often the case when we’re in the midst of an emotional breakdown. We can cover it up by putting on a smile and pretending to the rest of the world that everything is okay, or we can isolate ourselves to avoid having to deal with the issue.

But with gentle persuasion from his brother, Prince William, Harry started to address his issues. He talks of how he took to boxing to relieve some of his aggression and started seeing a counselor to be in “the good place” he is in right now. Yet it was not just therapy that has helped Harry. He says that just talking and opening up to friends has been of great help, and that this feeling is reciprocal with friends being able to “unravel their own issues.”

The prince maintains, “I know there is huge merit in talking about your issues and the only thing about keeping it quiet is that it’s only ever going to make it worse.” Harry however does recognize that opening up isn’t necessarily straightforward: “It’s all about timing. And for me personally, my brother, you know, bless him, he was a huge support to me. He kept saying this is not right, this is not normal, you need to talk to [someone] about stuff, it’s okay.”

Through the interview, Harry is really trying to highlight the purpose of the Mad World podcasts: “What we are trying to do is normalize the conversation to the point where anyone can sit down and have a coffee and just go ‘you know what, I’ve had a really s— day, can I just tell about it?’ Because then you walk away and it’s done.”

Following in his mother’s footsteps, Harry is heavily involved in charitable work, such as The Invictus Games for wounded servicemen, and, along with his brother and sister-in-law William and Kate, Heads Together, which addresses mental health issues. His “sweat and tears” are being put to good causes that will make a difference as the recipients will know they’re cared about. In stepping up and talking to the world about his problems he reminds us that no matter our position in life, we all may go through periods of suffering, and that’s okay. We need to talk through our problems.

But perhaps a bigger reminder to us all is to watch out for our loved ones who might be going through tough times, even with a smile on their faces. They may not even know they need help but with a sensitive ear, a cup of coffee (and maybe a bit of chocolate cake) they will know they’re not alone, and that’s a great start.