Was this man Beethoven’s ‘Salieri’? 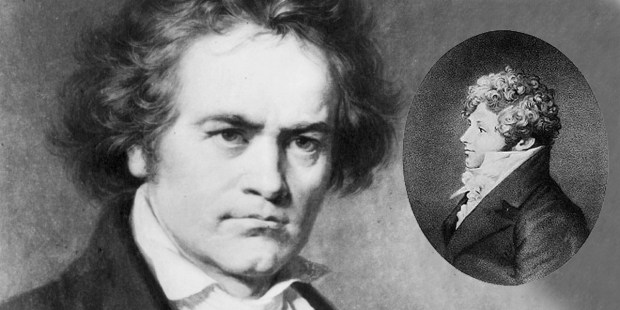 Daniel Steibelt challenged the great composer to a duel.

The 1984 film Amadeus made Antonio Salieri practically a household word. After a couple of centuries of  relative obscurity, Salieri came to be known to moviegoers as the jealous confidant and rival of Wolfgang Amadeus Mozart.

Another musical great, Ludwig van Beethoven, also had a rival, though it’s unclear whether there is a filmmaker out there who is keen on telling his story on the silver screen.

The story of Daniel Steibelt came to light recently, thanks to an article at the website historycollection.co. Steibelt was “a German born classical pianist and composer“ who “apparently also had a huge ego because he challenged the one and only Beethoven to a musical duel in Vienna in 1800,” writes Lindsay Stidham.

Like Salieri, Steibelt achieved a modicum of success in his day. “He rose to great popularity with ‘La Coquette,’ a song he composed for Marie Antoinette,” Stidham writes. The young composer made his way to Vienna in 1800, where he first floated the idea of a duel with his fellow German composer, Beethoven, who accepted the challenge.

The city’s music patrons liked the idea of a duel between Steibelt and Beethoven. Each musician got a Prince to sponsor the idea.

The contest  took place at the home of Austrian nobleman Count Moritz von Fries. Steibelt brought along a string quintet, which performed a stormy composition, and with bravado, he improvised at the keyboard.

Beethoven, not to be outdone, picked up the sheet music from the string quintet, placed it on the piano upside down, and worked out his own improvisation on one of its themes, which he showed up to be overly simplistic. It was clearly the more inspired performance, and the gathering recognized it. Humiliated, Steibelt stormed out of the room while Beethoven was still playing, followed by his prince-benefactor.

Though Steibelt has been an obscure figure in recent years, he went on to have a fairly successful career, even writing music for Napoleon and Russian Czar Alexander I before his death in St. Petersburg in 1823.

But it’s the genius of Beethoven that has stood the test of time.