4 Helpful relationship tips for spouses who work together 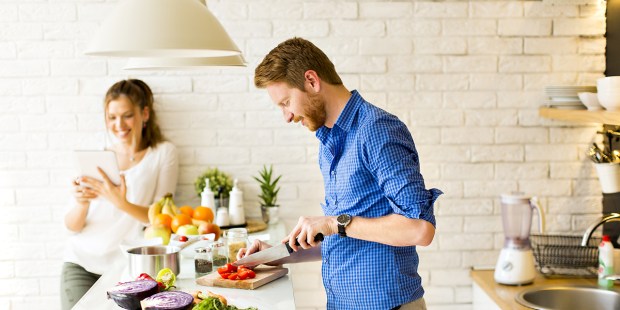 Do you run a business with your husband? Don’t let your love become one of your business costs.

Iwona and Jurek have two daughters, a cat, and a dog, and for the last several years, a catering company.

“Previously we both worked for large corporations, but when we started our own business together, I immediately noticed the advantages of working with Jurek: My husband does not compete with me, nor I with him. I didn’t have to explain being tired one day, or working less after a sleepless night taking care of sick daughters. We both understand the importance of vacation time, and go on a family retreat at least twice a year. In many respects our work life balance is simpler than ever before,” says Iwona.

“But somewhere down the road, we noticed problems with our older daughter, a second grader. Suddenly she began behaving like a preschooler: She whined, hung onto me, stopped making her own sandwiches for school, and even started talking like a toddler. When she reverted to a baby bottle instead of her favorite cup, we realized we had to get a psychologist involved,” Iwona says.

After a few sessions, they began to see the root of the problem. “It turned out that my husband and I were acting more like business partners than parents at home. We didn’t notice that dinner had become the time when we discussed business matters while we reviewed the work day. And in the morning we planned the work day at the breakfast table.”

Luckily, Iwona and Jurek’s story quickly found a happy ending. They began to consciously separate family life and business. They realized that enthusiasm for the business was great, but it needed boundaries.

Read more:
5 Exercises for spouses to revive their once passionate love

But in many family-run businesses, the spouses don’t notice anything is wrong until it’s too late. Just as it can affect kids, the marital relationship itself can secretly suffer, too. Sweet nothings and silly loving moments are slowly replaced by work talk. Your husband becomes a business partner first, a lover second, for better or worse. Fatigue can replace physical attraction or emotional closeness. And somehow, you both forget that the initial capital for your business was more than just money; it was built on family values and love. And those are the foundations that you can’t let erode.

In Iwona and Jurek’s home, the dining table was just like their work desks, so many of the business conversations about deadlines and contractors took place over home meals. Their daughter was reacting pretty directly to this office behavior: She was seeing coworkers at the dinner table, not parents. So her behavior was a call for help: “See me, talk to me, take care of me!”

But more often than not, the signs that the kids are suffering or your marriage is suffering aren’t so readily visible that something is amiss. Especially if the business is booming because it’s bringing a certain amount of joy and satisfaction into your lives. They show up later, often too late.

How to reconcile feelings and finances.

These problems can be serious, but they’re also fixable.

1. Write down the rules. The first step to setting clear work and home boundaries is organizing the business properly to allow a clean divide. So start putting job descriptions and work flow down in writing: the division of responsibilities, conflict resolution, and who makes the final decision in specific departments or scenarios. (That said, too many rules extinguish creativity and creative risk, which are helpful in business. So you’ll have to draw the line wherever you think is best.)

Unclear arrangements cause arguments, grievances, and quarrels which chip away at the loving part of your relationship. A quarrel with a colleague at work just isn’t the same as an argument with your husband. When you search for solutions, not the guilty party. All problems and ambiguities are best discovered sooner than later.

2. Note how and when you speak. It’s not about a complete restriction of business talk at home, because that won’t work long term. It’s about being mindful of your surroundings, and thinking about what role you need to play in different environments. It’s easy to slide into work at the dinner table, saying something harmless like, “Honey, can you take a look at this report again? I think there’s a mistake here.” But that snowballs into working on the report at dinner, or talking over your kids heads as they eat (or push around) their vegetables. So take a breath, and maybe change it to, “Honey, let’s talk about that report again after dinner.” And then be Mom again.

3. Give yourself a little freedom. You may love working with your spouse, but that doesn’t mean you need to be together 24/7. In fact, it’s probably best if you take healthy breaks. Go have a girls night, or take time for passions or hobbies that are just yours. Even little moments of freedom count too, like shopping—you can shop separately for a few hours, at the very least. Some separation can actually help you appreciate the closeness you have working hand in hand.

4. Remember to be married, too. There’s a saying I like to remind people of in this scenario: Lovebirds first feed each other and then pluck each other’s feathers. As a psychologist, I see couples who, absorbed in their careers and making money, drift apart even though they work together. And it’s because they often don’t take the time to clock out and just be loving spouses.

When the emotional capital of a couple is more important than the business capital, I find you usually come out ahead in both departments.