The awe-inspiring beauty of Armenian Christianity in Iran

Images from the interior of the Bedkhem Church in the Julfa quarter in Isfahan, Iran.

Bedkhem Church's intricate decoration makes it one of the jewels of Isfahan.

The Bedkhem (Bethlehem) Church is an Armenian Apostolic church in the Julfa quarter in Isfahan, Iran. The city itself, Isfahan, is nicknamed Nesf-e Jahān, “Half of the World,” so that puts this church “in the center of the world.”

Armenians have had a presence in what is modern-day Iran for thousands of years, interacting with the ancient Persian empire and, later on, with Shia Muslim rulers. In the early 1600s, the ruler Shah Abbas I forced Armenians out of what had been considered their ancestral lands and relocated them to the Julfa quarter of Isfahan. Armenians merchants and traders quickly became integrated into the economy and society of Iran, and in many ways adopted elements of Persian culture. They retained their Christian faith, however.

One successful Armenian tradesman, Khaje Petros, undertook the building of the Bedkhem Church in the late 17th century. He hired architects and artisans of Armenian descent, but the design of the church is highly influenced by Islamic mosque design, too — especially its gilded dome. Inside, the church features a more Christian style of iconography: 72 delicate paintings depicting the life of Christ as told in the Gospels surround the interior in two rows of panels.

The walls of the Bedkhem Church are covered with inscriptions written in Armenian, some dating to the 1600s, honoring those who gave of their charity to the building and beautification of the church.

At the time of the Iranian revolution, many Armenians fled the country, building new lives elsewhere. But Armenian Apostolic Christians remain the largest non-Muslim community in Iran today, and they continue to worship and function in society, even having representation in government. A quarter of them still live in Isfahan.

Scroll through the slideshow below to enjoy the beauty of the unique Bedkhem Church. 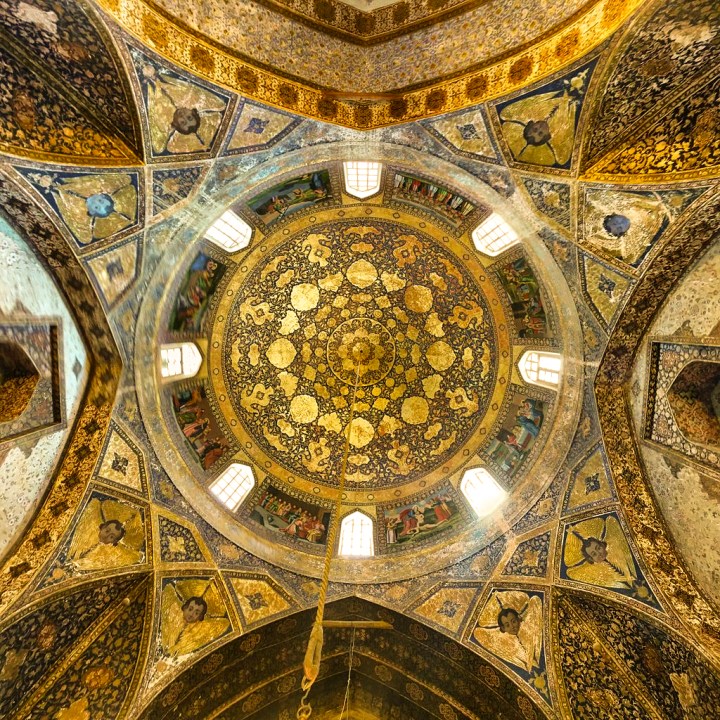