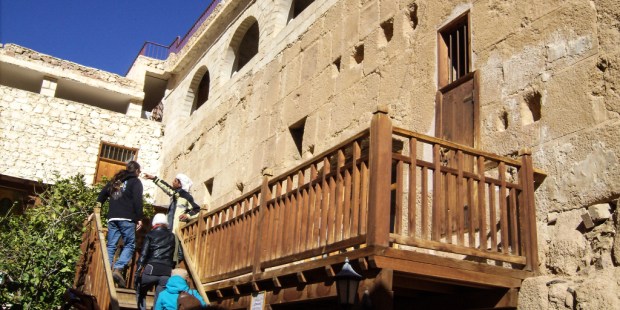 An attack near a Greek Orthodox monastery at the base of Mount Sinai in Egypt Tuesday is another indication that the Islamic State branch in the Sinai peninsula is spreading its tentacles and seeking to gain a greater foothold in Egypt.

“It’s an indication of the Islamic State’s growing operations beyond its stronghold in the border area of northern Sinai,” said Egypt scholar Samuel Tadros of the Hudson Institute.

The Islamic State affiliate in Sinai claimed responsibility for the attack on a checkpoint near St. Catherine’s Monastery, Egypt’s interior ministry said. The militants opened fire from an elevated hilltop overlooking the police checkpoint just outside the monastery. It left one policeman dead and four people wounded, but attackers were not able to penetrate the monastery.

Tadros, who is himself a Copt, said that the ISIS terrorists in Egypt have been a local operation in Sinai and have been struggling to “brand themselves” as the Islamic State’s Egyptian branch.

“They are a Sinai-based group with a Sinai identity, based on the tribal structure there,” Tadros said Wednesday. “And they’ve struggled to expand beyond that. Many of the operations that they did in the past inside mainland Egypt were mainly already-existing terrorist cells that would contact them for arms, for training, … and they’d get the credit in the end. But it wasn’t them.”

There is more and more evidence of greater control of operations in Egypt from ISIS headquarters in Raqqa, Syria, he said. “What this means is there’s a shift in the agenda. It’s no longer just Sinai, it’s becoming an Egypt agenda,” Tadros speculated. “That means that the Copts occupy a very important place, or the Christians are becoming a main target. Copts especially occupy a special place in Islamist literature in general and for the Islamic State specifically. They call them ‘our favorite prey.'”

If Tuesday’s target was indeed the monastery at the base of Mount Sinai, however, it’s arguable that the assailants don’t know that it is not a Coptic institution but a Greek Orthodox monastery. St. Catherine’s, which is about 300 miles southeast of Cairo in the south of the Sinai peninsula, has a population of about 30 monks. Founded by the Emperor Justinian, it holds some of the world’s oldest icons, which date from before the iconoclast controversy of the 8th and 9th centuries. Because the icons were in the remote desert location, they were spared the destruction of heretics who believed the Church must literally follow the commandment against “making graven images.”

“I don’t think ISIS understands the difference, that these are not Copts,” Tadros commented. Perhaps the assailants think, “It’s in Egypt so they must be Copts,” he mused. But “technically speaking, Copt means Egyptian. You can use it to refer to all of Egypt’s Christians.”

Read more: Copts are not a “casual” target

The attack comes nine days after Palm Sunday’s devastating bombings at Coptic churches in Tanta and Alexandria, Egypt, which killed 45 people. Agence-France Presse explained that Egypt is battling a jihadist insurgency in north Sinai that has killed hundreds of policemen and troops since the 2013 ouster of Islamist president Mohamed Morsi.

The problem of security is much broader than putting enough guards to protect a monastery or church during a religious celebration, Tadros opined. “The real question is Egypt’s ability to deal with the Islamic State’s presence. This is not a completely open space: it’s a peninsula sealed from one side by Israel, from the other side by the Suez Canal, and you’ve been conducting operations fighting them for over three years and yet not only are they unable to defeat them but they’ve also been able to expand, to conduct operations in mainland Egypt and sophisticate operations year after year,” he said. “What does this tell us about the Egyptian military’s ability to fight them, infiltrate them, to gather intelligence, to stop these attacks from taking place?”

That question will gain in importance as Pope Francis makes a two-day visit to Egypt at the end of the month. The Vatican said last week that the April 28-29 trip will go forward, in spite of the attacks on Palm Sunday. It was announced this week that Ecumenical Patriarch Bartholomew I will be joining the Pope in Egypt. One or both of them are likely to meet with Coptic Orthodox Patriarch Tawadros.

“It will be an interesting time in Egypt, with the leaders of the Orthodox, Catholic and Oriental Orthodox families of churches coming together,” Tadros said.

Read more: The Copts: Why does the Islamic State kill Egypt’s Christians?