“We all have a little tomb inside of us. Go there … and see how capable God is of bringing about a resurrection.”

VATICAN CITY — We all have a little tomb inside of us where we might think only sadness, defeat and darkness are possible, but see how God can turn that into happiness, joy and life — a resurrection of the heart.

These were Pope Francis’ words today at the Wednesday general audience in St. Peter’s Square, midway through the Easter Octave. In these joyful days of Easter, the pope continued his catechesis on Christian hope with a reflection on the Risen Christ, based on St. Paul’s powerful words to the early Christians.

“Our faith was born on Easter morning”

Speaking to the Corinthians (1 Cor. 15), St. Paul begins with the “incontestable fact” of the Resurrection, the pope said. “Christianity …. is neither an ideology, nor a philosophical system; rather, it is a journey of faith that begins with an event to which the first disciples of Jesus bore witness.”

“Paul sums it up in this way: Jesus died for our sins, he was buried, and was raised on the third day, and appeared to Peter and to the twelve (cf. 1 Cor. 15: 3-5). This is the fact: he died, was buried, rose again and appeared. That is, Jesus is alive! This is the heart of the Christian message.”

“Accepting that Christ was crucified and died is not an act of faith,” the pontiff said. “It is an historical fact. But believing that he rose is. Our faith was born on Easter morning.” 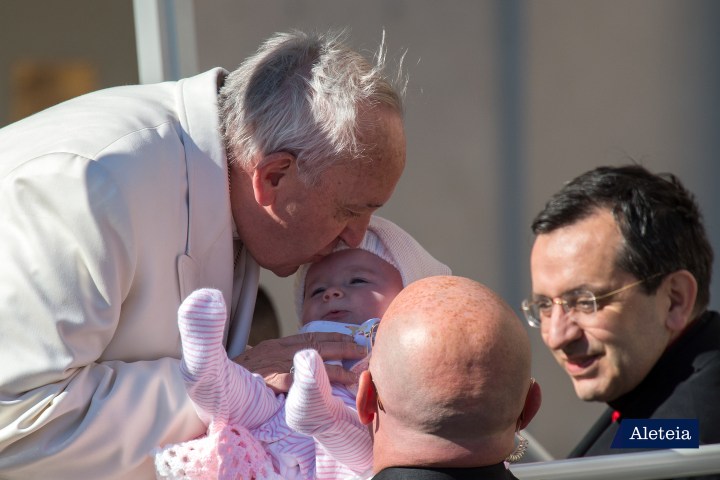 “The persecutor becomes an apostle”

St. Paul lists the people to whom the risen Christ appeared (cf. 1 Cor. 15: 5-7): first Peter, then the twelve, then to “more than 500 brethren,” and then to James and all the apostles. Last of all, Pope Francis said, Paul lists himself, describing himself as “one untimely born.”

“Paul uses this expression because of his own personal history,” the pope explained. “Paul was no altar boy, but persecuted the Church, proud of his own convictions.”

“He felt like a man who had made it, with a very clear idea of what his life and duties were,” he said. “But in this perfect portrait … one day something absolutely unforeseeable happened: an encounter with the risen Jesus on the road to Damascus.”

It wasn’t just a matter of a man falling to the ground, the pope said, but of a person being utterly captivated by an event that turned the meaning of his life upside down. “The persecutor becomes an apostle.”

“Why?” Pope Francis asked. “Because I saw the Jesus who is alive! I saw Jesus Christ who is risen! This is the foundation of Paul’s faith.”

“How beautiful to think that Christianity, essentially, is this,” he said.

Thus, as for St. Paul on the road to Damascus, Christianity is not so much our own search for God, but rather God’s search for us. That is why a heart enclosed in its own logic cannot understand Christianity, the pope insisted. Faith is “a grace, a surprise,” but it supposes a heart that is capable of “wonder” and open to grace.

“Christ has vanquished our bitter enemy”

Being a Christian, the pontiff added, means taking God’s love as one’s starting point, not death. “He has vanquished our bitter enemy; God is greater than nothingness, and only one burning candle is needed to conquer the darkest night.”

We all have a little sepulcher inside of us, the pope told pilgrims and faithful. “Go there,” he said, “and see how capable God is of bringing about a resurrection.” There can be happiness, joy and life, where we thought only sadness, defeat and darkness were possible. “God makes his most beautiful flowers bloom amid the most arid rocks.”

Pope Francis concluded: “During these days of Easter, let us carry this cry in our hearts. And if people ask us the reason for our smile and patient sharing, we can respond that Jesus is still here, that he is alive in our midst, that Jesus … is alive and risen.”